Where are they now Kermit Dorough

It is fun to go down memory lane and this is the longest memory to date. Kermit Sanders Dorough Sr. played football back when teeth were routinely knocked out with a forearm. When the canvas pants would cut your skin and when high school ended after the 11 th grade. Yes thats right for the younger people out there reading this, school use to go through 11 grades not 12. Mr. Kermit was in the very last class to graduate in 11 years. Alot of his teammates had to stay an extra year. Kermit graduated in the spring of 1950. While in High school Mr. Kermit played against Westpoint for a state title and lost. His younger teammates would avenge that loss later becoming the only high school state foottball champions from this county. Kermit was a two time all region player and In the fall of 1950 Kermit was asked to play in the All-star game later in August. Mr. Kermit accepted a scholarship to the University of Georgia and off he went. Then in January of 1951,  a coach by the name of Johnny Griffith of South Georgia in Douglas came recruiting younger players from the University of Georgia and he picked up a few and took them south literally. Mr. Kermit rode with the Coach Griffith from Athens to Douglas to go start and play at South Georgia. In those days not many people had phones at home and very few had them that lived in the country. Mr. Kermits dad was our former Clerk of Superior Court Jim Dorough. It should be noted that 17 year old Kermit Dorough hasn’t spoke with Mr. Jim and Mrs Eula about his transfer as of yet. After finally  settling in Douglas, Georgia and his parents now aware of his transfer Kermit spent 2 years  at South Georgia playing football and even made it to a couple of small bowl games one called the Lions Bowl in Laurel, Mississippi. After a particularly hard hit to the head in 1951 Mr. Kermit suffered a concussion, he ended up in Augusta, Ga awaiting surgery. After finally reaching his family in Cordele and getting his mother and sister to Augusta the surgery on his head was successful and Kermit went right back to playing football, he had not yet turned 18.
Times were certainly different in those days playing both ways was normal and Kermit played guard. Also you couldn’t use your hands on offense to block you could only hold your chest and push forward with your forearms. This leads to one of his most memorable football moments. While playing in Alabama against Jacksonville State the guy in front of him right arm was amputated  to his elbow. Every time he and Kermit tied up he kept hitting Kermit in the mouth with the nub of his arm. After a few licks well that began to hurt. “What he was doing was legal it was just very difficult to get around, “said Kermit. Mr. Kermit met his wife the former Le Coleman of Rochelle who was already a Registered Nurse and they married on January 1, 1956. They moved back to Athens ,Ga were Kermit finished out his schooling from the University of Georgia. The Doroughs have 4 kids Karen a doctor, Kathy a nurse, Bo a lawyer and Joe an engineer. It is apparent that Kermit and Mrs. Le insisted on their kids getting an educaion. Kermit and Mrs. Le enjoy there grand kids now adays and I see them at Cougar football games on Friday night. Actually Kermit came from a tough group his older brother Jim Dorough played football at Ga Tech, his brother Billy played football and both of his boys Bo and Joe played football. When you think about it Mr .Kermit was playing football in high school at 14 through 16 years old and college at 17 on up. When he left for college Mr. Kermit was really  just a kid a long way from home when communications where very poor. Basically folks men had to grow up a lot quicker when Mr. Kermit was a kid. 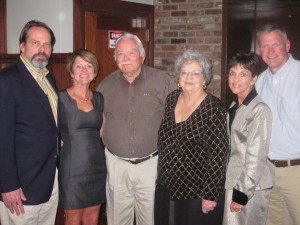