Where are they Now: Emma Mumphery 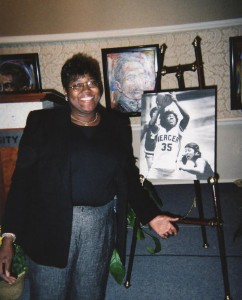 In the late 1970’s the Lady Cougars of Crisp County had begun what could only be described as a dynasty in girls basketball. Coach Jeff McCord had a team in 1978-79 led by Senior Emma D Mumphrey. that would go 21-4 and challenge for the title best in the State. Emma the daughter of Sammy L and Fannie Mumphery was encouraged to focus on her basketball skills in as much as it could provide her with a free college education. Emma had also exceled at track but gave that up her senior year to focus on Basketball.
Emma was recognized as one the top players in the State of Georgia. She was the Most Valuable Player for Crisp County in 1979 and signed her letter of intent with the Mercer Teddy Bears in February of that year. As a freshman at Mercer Emma continued to excel. She had the highest field goal percentage and broke the single season rebounding record with 413 rebounds during her Freshman year, a record that still stands till this day. Emma would continue her dominance at Mercer averaging 18 points a game in her sophomore year and 11 rebounds a game. The following year Emma would average 20 points a game and 11 rebounds. By the time Emma entered her Senior year she was a nationally recognized player. She would finish at Mercer as a 3 time MVP of the team with 2098 points and 1365 rebounds and many other records. She is the only player in Mercer history to be a two time “Margaret Wade” finalist which is given annually to the best lady’s basketball player in the land. Emma was the Southeast AIAW and Georgia AIAW MVP as well as Player of the Year For GAIAW Southeast Conference. She was a Kodak-All region player for region 3 and in 2005 she was enshrined into the Mercer University Hall of Fame.
To say that Emma had a fantastic high school and college career would be a serious under statement. Later after graduation Emma became a Physical Education Teacher at A.S. Clark Middle School and as the basketball coach she won her Middle School Basketball Conference Championship in back to back years .Emma gave up her coaching to focus on her children’s athletics. Her son Sammy played football and basketball and he did in fact end up signing a letter of intent .to play ball.
Now Dr. Emma Mumphrey Beal is retired from the Pike County School System and runs a tutorial program in her community . She is also the founder of Quest for Success Consulting Company. Dr. Beal remains an active part of her church and community. Emma has been instrumental in sponsoring children for basketball camps, raising funds for toys for kids and she has been a mentor to many young Mercer graduates through the years. Dr. Beal has two sons Sammy and Kelvin and one daughter Kenyatta. She also has three adorable grandchildren Isis, D’Sonji and Sammy III.