What A Rich History 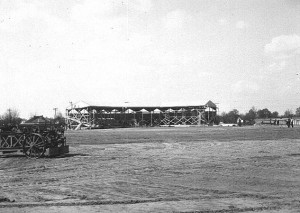 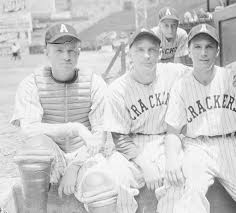 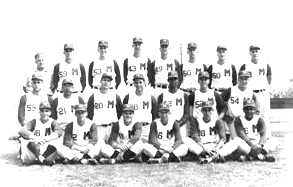 As far back as I can remember old Standard field has been there and ball of all kinds has been played there. We use to use the outfield as a practice area in Midget football for year and years. Thousands upon thousands of softball games have been played there. However, in the beginning it was built as a baseball field in 1936 for the now defunct Georgia _ Florida Minor league Baseball teams.

The original structure shown in photo has long been destroyed and the very old dugouts and concession stands have now been removed. It is a day to remember how things use to be. How many former Major League greats have played a game on this field. Pete Rose was on the Macon Peaches for a short while. The great Shoeless Joe Jackson after he was dismissed from Major League Baseball traveled around South Carolina and Georgia playing in numerous small towns in semi pro ball. There really are so many from those days that more than likely played on Cordele’s new field.

Cordele for the most part served as major league affiliates to pro teams such as the Cincinnati Reds, Baltimore Orioles Philadelphia Athletics Cleveland Indians Chicago White Sox and countless years they had no affiliation but were a semi-pro league host city. From 1906 till 1962 Cordele had a large amount of future Major Leaguers come through here some famous some not so famous but they were here. “ Actually New York Governor Mario Cuomo played on that filed,” said Zack Wade Chairman of the Cordele City Commission. “ I remember Perry Culpepper running down that story and talking to him 35 years ago to verify that.” Cuomo played for the Brunswick Pirates in the Now defunct Georgia –Florida League.

In the early days the Cordele High School and later the Crisp County Schools played their games on  Standard field along with the Pony League baseball teams of the day.

There was a time in the early sixties that the fair would set up at standard field and that after it left all of the animal poop was buried out there. I t wasn’t buried very well because months later when ball started back up there were still holes in the field as many of the 50’s and 60’s generation of young people can attest to. Empire State League, Georgia-Alabama League, Georgia State League and of course the more famous Georgia Florida League all used the old standard field as a venue. Cordele had many different names and entertained many personalities in the early days. The Bees, Reds Ramblers and Babies were just a few of the Professional names hung on Cordele’s semi pro baseball teams. In 1937 Cordele won the Georgia-Florida League under the manager Ivy Griffin.

As many of you may remember the “Great” La La Smith was a tremendous athlete back in the day and folklore has it that he could stand at home plate with two cantaloupes in his hands and throw them over center field fence, now I was raised here and have thrown many a watermelon and cantaloupe in the field and if he could do that HE WAS A MAN!!!!!! “ I watched LALA hit homeruns out of that field right handed or left it made no difference,” said Zack Wade he had great power even as he got older. Standard field has been with Cordele and Crisp County as long as anyone alive today can really remember. The tearing down of the dugouts and concession stand were a necessary first step in the restoration   to come to that corner. It is old and still usable and we as a community should take full advantage of the opportunity to make a once great center of community pride a focal point again.