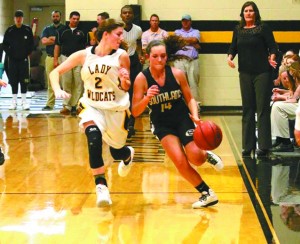 Friday night in Camilla was the scene of another classic Cats battle. The Wildcats of Crisp Academy took on the Wildcats of Westwood Academy. The home standing Cats took a close victory 44-41.

Over the last several years and including the Crisp Academy Lady Wildcats four State titles in a row the nemesis of Crisp has always been Westwood and so the tradition continues. “ Turnovers just killed us,” said Gina Mitchell the Lady Cats head mentor. “ I f we limit our turnovers we could have won that game, we have to do better in the future, you can’t give good teams anything.” On offense Sidney Folsom led the team with 11 points. A trio of Cats all pumped in 8 points each, they were Parker Krause, Claire McGarr and Sydney Wells. The lady’s will get to host Westwood on Friday at 6:30, in the meantime they play at Americus against Southland and then in Dawson on Thursday the 10th against Terrell Academy.

The boys dropped an 80-69 decision to The Westwood’s Cats. “To many turnovers, we have to handle the ball better”, said George Kennedy Wildcats Head Coach. Bobby Ray Mitchell thumped in 20 points and Robby Patel added 19 in a losing effort. All in all the cats had 8 different kids score.