On Thursday Fullington Academy Trojans traveled over to Albany to take on the Sherwood Eagles. They ended up splitting the games with girls winning 39-28 and the boys falling 62-51.

In the Lady’s game Fullington jumped out to 16-2 lead after the 1st period and they never relinquished it. The Lady’s were pretty much in charge all game and only once got into any trouble. In the third period the Trojans got into a little foul trouble with a 9 to 1 foul explosion. “ The girls played very well on defense and that set the pace of the game,” said Head Coach Van Bailey. On the night the lady Trojans had 20 steals, 27 forced turnovers, 25 rebounds and 6 assists. The win puts the girls at 2-4 on the year. They were led on offense by Lauren McIntyre with 15 points and Grace Musslewhite and Chatell Coley both added 6 points each in the win. The defensive standouts were Coley and Liena van Assendelft.

In the boys action they fell behind 28-6 and could never recover. After a 13 to 1 foul ratio on the boys in which Fullingtons leading scorer had to sit down and only played 3 and half minutes the whole game. The Trojans found themselves in a hole and had to dig their way out. They out scored Sherwood in consecutive  periods of play for the remainder of the game but the initial hole they dug was to deep. Sherwood’s leading scorer garnered 17 out of 21 foul shots to pace the winners in this contest. The Trojans were led on offense by Sam Evan with a career high 15 points and Ty Tyndal tallied up 9 more in the loss. In all the Trojans managed 31 rebounds, 9 steals and 6 assists. “ The fouling difference between us and them was a big factor, once the boys setteled down we started chipping away at their lead, “ said Coach Bailey.

The Trojans travel to Dasher to play Georgia Christian on Saturday at 2:00p.m. and then Monday to Macon to take on Central Fellowship. 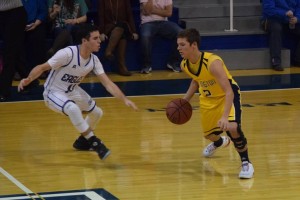