Where are they now: Ronnie West

In the small little village of Pineview,Ga. they grow stallions. That best describes the football players coming out of the area. Recently Nick Marshal debut on the world stage from there but 30 years ago a man named Ronnie West emerged as a standout football player at Wilcox County High., I might add he is Marshall’s older cousin.

Born Ronnie Lee West he was the 5th of 8 children to Robert Lee and Mary France West of Pineview,Ga. To say that Wilcox had a beast at Wide Receiver and at Safety would not do credit to the player and the man he would become. Ronnie West would star at Wilcox County and go on to be an all-state wide receiver and defensive back for the Patriots. Ronnie was offensive player of the year for the Atlanta Journal and Macon Telegraph. Ronnie originally signed to play college football at Valdosta State, but it appeared all the coaches in college wanted Ronnie to play Defensive back not wide receiver. Ronnie would end up sitting out two years of football and during that time he joined the Army. While out in Kansas Ronnie went to Pittsburg State University in Pittsburg, Ks.

There Ronnie had a very open and honest conversation with the Coaches about playing Wide Receiver. The rest is all football history. Ronnie ended up serving 10 years in the Army reserves and attained the rank 1st Lieutenant . In  the mean time Ronnie would attend college on Scholarship and play Wide Receiver for the Pittsburg Gorillas. A division II school. Ronnie proved all previous college coaches wrong and his current one looked like a genius. Ronnie not only started at Wide Receiver in college he shattered school records  making 85 receptions for 1779 yards and 21 TD’s at Pittsburg. Ronnie earned all- American status in Division II two consecutive years in a row and his Senior year Ronnie would be  Special teams selection to the Kodak All American team all divisions. You see Ronnie also ran back kick-offs and punts and he lead the nation in punt return average.. The biggest day in his college career came however, when he was selected as the Harlon Hill Award winner. Often called the division II “Heisman Trophy” it is awarded to the Most Valuable Player in College football. There  are 128 division I schools and 317   division II schools in the country. Ronnie is the only wide receiver ever to win the Harlon Hill Award. Ronnie also led his Pittsburg Gorillas to victory over Jacksonville State University in the National Championship in 1991. It is really not feasible to list all of Ronnies accolades; it is suffice to say they are numerous. In 2002 he was inducted into the Kansas Sate and Pittsburg University Hall of Fames. The December 23rd, 1991 issue of Sports Illustrated has a great deal of coverage on Ronnie as well.

Ronnie was drafted in the ninth round by the Minnesota Vikings in 1992. Ronnie would go on to play in the Canadian Football league and then in the World League of American Football for the London Monarchs.. Ronnie got his degree in Psychology from Pittsburg. He is now living in Pineview,Ga. with his wife the former Debra Green of Cordele. Ronnie has one daughter Essence West who is a Freshman in High School.

Ronnie runs a Trucking business and auto shop in Pineview. In his spare time Ronnie is a mentor to young kids and athletes around the area as well as a role model for all to see.

There are many things in this world more important than playing football and I firmly can see that Ronnie knows that as well. Officer in the U.S. Army,humble, great great football player, gentleman, father, husband, Christian and mentor to kids those are the contributions to society that stand out about Ronnie. There are many more but let’s just say that my impression of Ronnie is that “when the roll is called up yonder he will be there.” 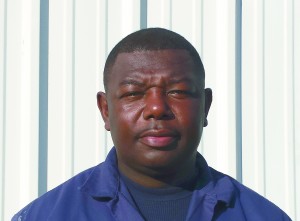