Jones, a 2008 graduate of CCHS, led the team to a 21-20 win over the Night Hawks in the title game of the 2015 YMCA Flag Football League on Dec. 13. During the eight-game schedule, he only played in five games, but recorded 10 touchdowns to lead the league. With those high numbers, the YMCA voted him the league’s Most Valuable Player.

The next day, the Little Rascals faced the Night Hawks in the championship game of the Sherwood Christian Adult League (also in Albany). Jones scored the winning touchdown to lead the team to a 29-28 win.

The two title wins over the Night Hawks marked were the only victories the Little Rascals recorded over them in either league.

Jones is a 2013 graduate of Albany State University where he starred for the Golden Rams from 2009-2012.  He is currently an assistant coach for Monroe High School in Albany. 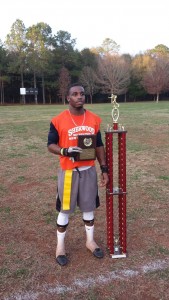