Where are they Now: Curtis Fisher

Back in the day Crisp County had some real good baseball players: and one of them was Curtis  Alan Fisher. Curtis played football and basketball as well but he excelled at baseball. In the early 1970’s Curtis patrolled the ball field around 3rd base as his career progressed he would become a first baseman. Like most kids from the baby boomer era (when there was no internet, no cell phones, no play station and TV here in Cordele had channels 3, 10 and 13 )  your choices were to play ball or work after school and sometimes both. Well Curtis played ball and he polished his skills very well as time moved on. It was obvious to all the kids around him back in the sixties during little league that Curtis was going to be a good one. A perennial all star in his early days, Curtis even made the faces in the crowd section of Sports Illustrated in 1969. Curtis would go on to be an all region player and a member of the 1st place region 1AA squad in 1970. “ Curtis was a natural hitter, selective in what he hit, he was always under control at the bat,” said Cliff Hearn long time friend and teammate.

One of Curtis’s fondness memories was being a member of the 1971 Georgia Recreation and Parks Association State 15 and under Championship team. A team coached by his father Martin Fisher. Upon graduating High School from Crisp County in 1972 Curtis earned a try out with Miami Dade South College, which at the time was one of the very best Junior Colleges in America and he earned a scholarship. He started off as the 4 th string 3rd baseman but soon made his way to being the starter. One of the assistant coaches at Miami Dade was none other than Legendary College Baseball coach Ron Polk. Coach Polk accepted the Head Coaching job at Georgia Southern in 1975 and he immediately signed Curtis to a scholarship. After another stellar career at Georgia Southern Curtis was drafted as 209th pick of the Major League draft by the New York Mets.

While working his way through the minor league program from rookie ball all the way to triple A, Curtis suffered a number of injuries and high lights, like the 2 homeruns against the Reds and also being named a top prospect by the Mets organization and he led their minor league program in home runs, RBI’s and walks. After 4 years in the minors and nagging injuries that kept Curtis from playing to his abilities he hung up his cleats in 1980.

Curtis spent the next ten years in the Miami area working for Citicorp and the Airline industry in Finance. He moved away to Atlanta in 1990 and has remained there ever since. Curtis is now self employed in the finance  and mortgage end of the solar power industry, developing solar projects. It was on a blind date in 1993 that he would meet the love of his life the former Tammi Zuckman of Atlanta. They have two children Andrew who is a junior at the University of Georgia and wants to be a lawyer and his daughter Lyndsi a 16 year junior in high school. Throughout Curtis’s fabulous career he won many accolades, there were many batting titles he was 2nd team College All_American and the list goes on. To Curtis from a baseball point of view his days in Cordele as kid stand out. However, in his eyes his greatest accomplishment was marrying his wife Tammi and their two kids. So one day when the story is told of all the great Athletes that have come through Crisp County, well just pencil in the name Curtis Alan Fisher right up there at the top. 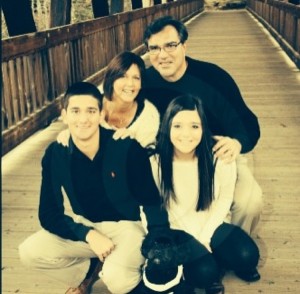