In the First round of The Turner County Christmas Tournament The Cougars dominated Lanier County 82-41. The Cougars jumped out in front and never looked back. After the 1st period Crisp led 17-11 then at halftime they had moved up to  a 44 to 24 lead. In the third stanza the Cougars out scored Lanier 16 to 10 and finally 22 to 7 in the last quarter. Crisp shot 51 % from the field with 35 rebounds, 8 assists, and16 steals. Crisp didn’t fare very well from the line however, shooting just 50%. A host of Cougars hit in double digits Quay Walker had 12, Quinatvious Dean had 11 and Jaleon Perry had 10. Also Valdis Daniel and Ijon Owens pumped in 9 points each in the winning effort. Nearly every Cougar saw a significant amount of playing time  in this total team victory. 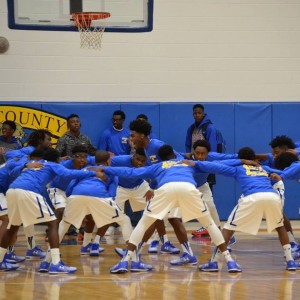 With this win Crisp County advances to the Championship on Tuesday night.

Crisp fell behind in the first period 15-12. Then rolled back out scoring the Canes 17-8 in the 2nd period to go in at halftime up 29-23. The Canes again stepped up in the third beating the Cougars 13-11 only to see Crisp County turn it up another notch in the final stanza for the win. The Cougars shot 43% from the field but improved to 80% from the line where they got 20 of their points. From a statistics stand point the Cougars won all major categories. Crisp had 34 rebounds, 9 assists, 11 steals and 9 turnovers.

The Cougars were led by Quinatvious Dean with 17 points, followed by Ijon Owens with 11 and Quay Walker with 9 points.