Where are they Now: The Carters

There are not many families that can boast 80 plus years of sports participation. Then add on top of that higher than normal athletic achievement through 3 generations in the same community but the family of Mr. Millard Fillmore Carter Jr. affectionately known as MF has done just that. Cordele and Crisp County has been blessed to have had an entire clan of football, baseball, basketball and tennis players come from one family .It should be noted that Mrs. Carter has been out there cheering them all on for over 60 years.

Let’s travel back to the days when Mr. MF was playing football in the 1930’s. Described in a 1937 edition of the Cordele Dispatch as a star. Mr. Carter was also a certifiable track star. In a track meet in Americus in 1937 he won 9 out of 10 events. Mr. Carter was selected as an all-state player and played in the very first high school all-star game. Mr. Carter was given a hand written scholarship from the Freshman Coach of the University of Georgia in 1939 (I have seen it). As an athlete in high school MF was a running back   even though he was a big man. When he got to Georgia they had a back up their by the name of Frank Sinkwich (Heisman Trophy winner) and another on the way named Charlie Trippi.( All American). Well since Mr. MF was as big as a lineman they made him a lineman.

MF would stay at Georgia till WWII broke out and Uncle Sam called up every able body male. He was first sent to North Africa to fight Rommel in a tank division attached to General Patton. After being wounded in battle Mr. Carter was sent back state side and discharged. Mr. MF then joined the Army Air Corp went to flight school and became a bombardier on B-17 ‘s for the remainder of the war. While stationed down in Gulfport, Miss. Mr. Carter met the love of his life the former Amelia Mary Easterling of Gulfport. They were married on September 30, 1944 and he was shipped out again. The war didn’t last forever and Mr. and Mrs. Carter would have 6 children.

MF Carter III, Hal, Fred, Fran, Tom and Tim were born over a twenty-year period and all of them found some kind of ball to play. MFIII played offensive guard went off to Southern Mississippi and then on to a place called Vietnam. While visiting out in Gulfport back in the 1960’s Millard the III would make his home there and raise a family. His two children would go onto excel in sports Thomas would play baseball at Ole Miss and daughter Sara at 5 feet tall would become all everything in Mississippi and go onto play at the University of South Alabama in basketball.

Next in line was Hal who after finishing high school at Crisp County High were he starred in football and track attended Gordon Military College to play football and then later would transfer to the University of Georgia,

Hal had 4 children Hal Jr. Jeff, Katie and Bo. All of them graduated after having played sports Junior went to Georgia Southern on a Football Scholarship, Jeff was all region and a preferred walk on at UGA, Katie was a cheerleader and Bo went onto play football at Georgia State in Atlanta. Fred was a baseball star at Crisp County High and Fran his Twin sister was a four-year cheerleader and tennis player. Fred’s son Joey played baseball and daughter Hannah did some cheering. Fran’s son Brian played football at Florida State and daughter Rebecca played basketball. Tom played football and baseball in high school and he married Charisa Polk who played basketball and their children JT and Laura Leigh played baseball and basketball respectively. Then Finally came Tim who played football and baseball and Tim was all middle Georgia in football and won the “big Stick” award in baseball for being the most productive offensive player at Crisp County High his senior year. Tim has two son’s Will who was recent 2015 all region selection in football and looks to be named that also in baseball this year as a senior. The Youngest grandchild “Jack “ as everyone calls him can only be described in the new modern term as a “Beast” in all sports a perennial all-star.

This brings us now to the 15 great grand children, which would be the 4th generation. Only time will tell but if I was a betting man my money would be riding heavy on at least 15 more athletes many of which would be playing right here in Crisp County. So there you are 80 years 21 ball players with 15 in reserve all from one lineage that’s pretty impressive I don’t care where you go. For the most part a large number of the Carter regime still live in Crisp County and that bodes well for the future of our sports here. They are truly what I call a  “sports” family. I did’t even get to the best part of the Carter family, Mr.  MF’s fabulous fish stories but alas I am out of room so just ask one of his kids they all know them well. Enclosing let me say that I am certain as I am my own name that Mr. M.F. is sitting up in his lofty perch smiling down on all  his descendants enjoying the ball games. 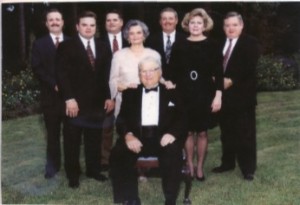 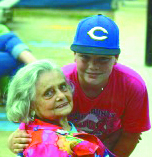