The Lady Trojans are riding high now on a five game win streak and have moved their overall record to 8-8  with the win Tuesday against Highland in Pinehurst.

The ladies won 48-21 and were led on offense by Liena van Assendelft with 21 points and Lauren McIntyre added 11 in the win. Assendelft also added another 13 rebounds in the contest.

“The girls are really starting to gel and get their basketball legs under them, they are making some real headways now,” said Head Coach Van Bailey. Fullington will be home Friday against Skipstone in their first Region game.

The Fullington boys were missing some players for this game and it may have cost them.

Fullington was led on offense by Sam Evans with 7 points. No other stats were available. The boys have been bouncing back though having won 3 out of last 5 games and now move to 4-11 on the season heading into region play Friday Night. 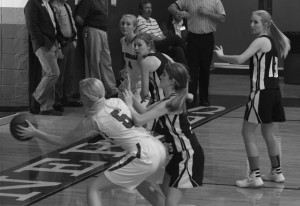