Cougars win 2 out of 3 over the Weekend

On Friday night the Crisp Cougars traveled down to Thomasville to take on Central of Thomasville Yellow Jackets. The Cougars jumped on the Jackets early and took the sting out of them, the Cougars never relented and came away with a 71- 57 region win.

The victory on Friday night pushed the Cougars to 13-4 overall and 6-4 in Region play. The Cougars went up on the Yellow Jackets 15-5 in the first and 34-19 at halftime. Central was never able to gain any ground the Cougars and the visitor’s took one from them. Crisp County was led on offense by Quenatvious Dean with a whopping 32 points on the night. Valdis Daniel added another 9 for the winners.

The visiting traditional basketball powerhouse Westover Patriots got the best of the Cougars on Saturday night winning 54-49.

The score however is not indicative of how the game went. The Cougars had a chance at the end of the game to tie it up but the ball just didn’t fall their way that time. Quenatvious Dean led the scoring with 22 points followed by Valdis Daniel with 10 and Ijon Owens with 7. Crisp shot 39% from the field and 75% from the line. The Cougars out rebound the Patriots 30 to 24 and garnered in 13 assists to their 0 but their shooting proficiency from the field was the Cougar undoing. The loss leaves Crisp with a 13-5 record and 6-5 in Region play.

The Cougars picked up an extra non conference game in the Turner County MLK  Day Tournament. Facing off against Clinch County the Cougars never really trailed but Clinch stayed close as the Cougars played their entire team. The Cougars Scoring was spread out with Quinatvious Dean scoring 16 followed by Nook Armstrong with 15, DJ Tolbert with 11, Quay Walker with 8 and Shabazz Maddox had 7 points. Next up for the Cougars is a visit to a improving Albany High Indians team in a region matchup at 6:00p.m. 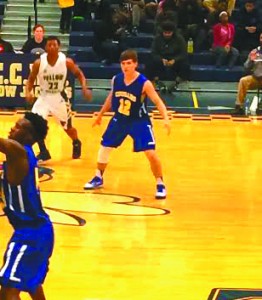