Cougars rip off Four wins in a Row

The Cougars ripped off 3 wins in a row one over a region opponent and the other two over local rivals.

In game 1 action Crisp took region foe Cairo and beat them 46-29. The Cougars led the game from start to finish and had 30 rebounds, 15 steals and 5 assists to win 46 to 29. In the contest held last Tuesday the big Cats shot  37% from the field and 60% from the line. Led on offense by DJ Tolbert with 11 points, Nook Armstrong with 9 points, Quinatvious Dean 7points and Shabazz Maddox dropped 6 points.

Next up for the homestanding Cougars was a visit from Wilcox County. Crisp County won that contest 69 to 50. Again the Cougars were never really in any danger as  they shot 57% from the field and 45% from the line. Wilcox stats were not available. The Cougars pulled in 36 rebounds, 9 assists and 14 steals. Crisp was led on offense by Quinatvious Dean with 27 points and DJ Tolbert with 13.

In the final game of the week Crisp County hosted a hungry Dooly County Bobcat team and came back in the 4th period to win the game 69 to 60. On the night Dooly lead Crisp County a good portion of the game and pulled down 32 rebounds to Crisp County’s 29. The Cougars and Dooly were even in shooting percentage from the field at 45% and the Cougars slightly ahead from the line. Leading the Bobcats on offense was Senior Adrian Kenney with 23 points followed by Jar’Quavius Brown with 12 points and Tyjae Taylor with 10 points. The Cougars had 4 people in double digits led by Ijon Owens with 19, Quinatvious Dean with 18, DJ Tolbert with 15 points and Valdis Daniel added 12 in the Cougar win.

With the win the Cougars finished the regular season at 18-7 and 8-7 in region play.

Dooly County finished up regular season with a 10-14 record and 7-9 in region play. Next up for Dooly is a neutral site game against Marion County on Wednesday at 5:30 @  Greenville.

The Wilcox Patriots ended up 14-11 and 11-5 in region play. They are now in 3rd  place in region awaiting their playoff assignments.

Monday night in Albany the Cougars won the first round of the region playoffs by a 71 to 63 score over Thomas County Central.

Crisp County was never really in any kind of trouble even though they did let Thomas County Central have a couple of good runs in the 3rd and 4th stanza. Shooting 45% from the field and 70% from the Cougars not only out shot the Yellow Jackets they out rebound them 38-29, had 9 assists to 0 for TCC and 9 steals to 5 on defense. The Cougars were led on offense by Quinatvious Dean with 24 and Ijon Owens with 17. Next up the Cougars travel to Monroe of Albany to Play Bainbridge. 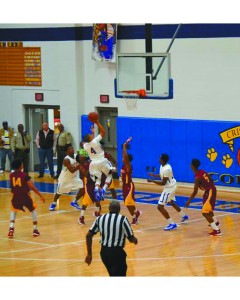