Playing phenomenal defense all year long, the Crisp Academy Lady Cats made it to the State title game and they came up a little short against Monsignor Donovan  of Athens 42-34.

The ladies posted a 29-4 record this year. Those 4 losses were 2 to Westwood an AAA team that played in State Championship and one to Westfield a AAA team that played in the final Four and to Monsignor Donovan  the State Champs. “The ladies showed a lot of class and the heart of a champion,” said Head Coach Gina Mitchell. “ They didn’t catch a break in the final game.”  It should be noted that in the final game Monsignor Donovan Academy went to the foul line 26 times compared to Crisp Academy’s 6 and 10 of their 12 points in the final stanza was off foul shots.

Parker Krause led the scoring with 14 points and 6 rebounds, followed by Claire McGarr with 13 points and 8 rebounds. Margaret  McGarr added 5 points and Sydney Wells had two in the loss. The ladies had managed to make it a one possession  game with just over a minute to go as they were down by 3 points. After missing a shot that was rebounded by Monsignor Donovan that they took scored on and drew the foul, the Cats were down by 6. With about 50 seconds remaining the fouling began and the score did not reflect the game afterwards. Even in the loss the Lady Cats have continued a program of excellence. Meaning when  they play they are expected to win . In the last 6 years the Lady Wildcats have won 6 region Titles 65 straight region wins, 4 State Championships, 5 finals appearances and 6 Elite 8 appearances and in the process have amassed an over all record of  155 and 31 which is a winning percentage of .833 and half off those losses came last year when they beat the state champs 3 times. SOOOOO how do you spell DYNASTY!! I spell it Lady Wildcats it’s simple. 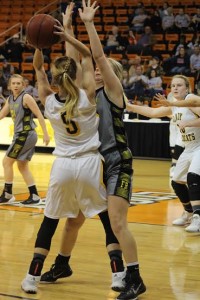