Where are they Now: Steve Sumner

It is the Summer of 1971. Ka Boom a baseball leaves the end of the bat in a towering shot over the left field wall. Only moments before that Steve L. Sumner had turned to the man on deck who happened to  be Cliff Hearn and said “I’m fixing to hit this out of here.” Just like Babe Ruth’s famous called shot or Joe Namath’s infamous “I guarantee a win,” statement Steve Sumner had now etched himself into Crisp County baseball lore.

Steve Sumner had big shoes to fill when he came along playing baseball in the  late 60’s and early 70’s. His big brother Stan had already been a stud playing and winning Crisp County High Schools only State Championship  in 1961. Well he over filled them shoes. The Cougars didn’t win a High School State Championship, but that homerun mentioned earlier sent them to the State Championship in Georgia Recreation and Parks Association. It also came in the bottom of the 14th inning as a walk off homerun and a 1-0 win. The Cordele crew went onto win the GRPA State Title in the high school division.

These are the things legends are made of. Always a perennial all star growing up, in high school it was Steve’s job to anchor the 3rd base corner of the Crisp County Cougars. After a stellar High School career Steve signed with ABAC to play ball and afterwards followed up going to Valdosta State. While at ABAC he won the best hitter award, best Defensive player award and was All State Junior College in his sophomore. Later Steve would take his talents to Valdosta State where he would serve as a team Captain and play in a division II World Series. Steve graduated VSU with a degree in Business Management. After college Steve married the former Gretchen Godfrey of St. Marys,Ga. and they have one daughter Brittany and son in law Charlie Pelt.

Steve went to work with State Farm Insurance as an  agent and worked up to Vice President over 600 agencies in Georgia. Steve retired 3 years ago and enjoys his family time and the Georgia Bulldogs. About 15 years ago a group of friends from high school started getting together and cooking out about 2 times a year and it has been a blast for them all. Steve and Gretchen now reside in Forsyth, Ga. and his hobbies include golf, hunting, fishing  and hanging out at the lake and his farm.

Steve is not the only athlete in his family his wife plays tennis twice a week in Atlanta and has been city champion numerous times. His son in law Charlie played baseball in college at Georgia State and then spent a couple years in the St.Louis Cardinals organization. Steve’s greatest joy is his daughter Brittany and as of now there are no grand children. “Growing up in Cordele was a great time I still have many good friends there and I wouldn’t change it for nothing, “said Steve.

“ He was an unbelievable teammate and competitor, just great to be around,” said teammate Cliff Hearn. “Steve was a great player! He held the “Hot Corner” down very well,” said Former Coach Jimmy Alexander.

Over the last nearly 100 years there have been countless good athletes come through this area. Football, baseball, basketball, tennis, track you name it we have had them all. Steve played on the 1970 Region 1AA championship team. It was however, on that day in 1971 playing against Ray Goff and the Colquitt County Recreation Department that  “the shot heard all the way to Cordele” was fired by Crisp legend Steve Sumner another chapter in the Crisp County baseball history book. 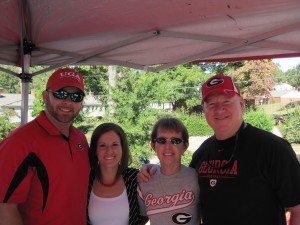