Right when the Cougars need to get on a streak they do. Crisp County moved themselves into position at 1 game out of the playoffs,  with  their win  against Americus 14-2 on Tuesday night.

With the win, Crisp County is  one game behind Cairo and Bainbridge who are tied for the 3rd and 4th playoff slot at 8-3 in region play. The Cougars who are now 8-4 in region play have a region contest at home Friday against  Westover and Tuesday in Cordele they host Bainbridge. Wins by Crisp County puts them in the drivers seat for the playoffs. The Cougars 5 game win streak is their longest of the season.

The Cougars put up a season high 13 hits against the Panthers. Will Lanneau led the charge going 3 for 4. He was followed by Kasey Herrington with 2 hits, Austin”Boo” Walls with and Adam Burnett also had 2 hits in the win. Crisp County used 4 pitchers over the course of 7 innings. Walls pitched the 1st inning, Dagan Kennedy the 2nd and 3rd, Will Carter the 4th and 5th and Josh Powell  finished the 6th and 7th. The Cougars now stand at 9-8 overall and 8-4 in region play with 1 non region game at Colquitt and 8 more region contest to go. 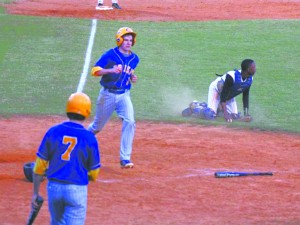