Do You Remember When

It was August of 1981 and down in South Georgia in a town called Cordele the  Crisp County Cougars Football team under Head Coach Ferrell Henry were about to embark on the most unforgettable season in school history.

Get the picture now we are in football camp. In those days we would report on Sunday night to the High School and get our cushion to sleep on, it was about 5 inches thick. We took that make shift bed down to the 9th grade lunch room and set up house in there. Now our hearts may have belonged to Jesus and our mama’s but our butts belong to the coaching staff. Whew!!!!!!! It was hot real hot all week. We practiced literally 4 times a day. Here was the schedule wake up  5:30 a.m. 1. Early morning exercises lasted about 45 minutes then shower go to breakfast at 7:00am next 2. Get dressed for football practice be on the practice field at 9:00am come off field at 11:30am then shower and report to lunchroom at 12 noon. 3. After lunch we got an extra hour of “food digest” time, nap what ever then back on field 3:00pm. Practice  till 5:00pm come in take a shower and eat supper at 6;00pm 4. Report to stadium fully dressed again for 3rd time today at 7:30pm. Sometime between 9 and 9:30pm practice was over take shower and lights out at 10:30. To be honest no one had a problem going to sleep. I vividly remember three things from camp 1. No body could snore louder than our coaches. I believe Coach Robert Smith and Coach Cox took it as a challenge to see who could make the most racket however. 2. Coach Henry loved to jingle his keys in your ears at 5:30 am to tell you softly “to get up boys”. 3. Every morning when we reported to the practice field and the morning steam rose off the grass Roy Peacock puked some blue stuff just by looking at the field. Oh and back then coaches really didn’t know anything about the hydration of players hmmmmm yeah they knew nothing.

Now don’t get me wrong it was rough but we loved it ( well some of the time). Our season started off at home against Worth County on August 28th with an ugly 7-0 win Bruce McFarland found John Hughes in the end zone for our only score of the night and we pitched one of our 4 shutouts on the year.

Next up we traveled to Atlanta to whoop Westminster and then back home to play the best team in Alabama which was Northview and we got our first loss. We traveled to Dodge County and obliterated them 34-0. That’s when the mighty Perry Panthers came to Cordele. After dominating Perry the whole game. They had no positive yardage and no first downs with less than four minutes to go and we were up 10-0. We attempted a short field goal to extend our lead. They blocked it and ran it back for touchdown. We got the kick off and punted they got the ball and broke a very long 65 yard run down to our 5 yard line and 2 plays later scored and beat us 14-10 that was a very difficult pill to swallow, our pride was hurt.

After that we reeled off 3 straight wins against West Laurens, Jones County and powerful Dublin. Next up was our nemesis and chief rival Americus. We lost that game 14-7 in a close match up but our memory was like an elephant and we never forget. The following week we traveled to Peach County and destroyed them. Now came the playoffs. We entered the playoffs with a 7-3 record and first up was you guessed it Americus. In the single biggest win in Cougar history Crisp County beat Americus 15-12 in the “battle of the Flint” series to go to the region championship. After dispatching Dublin in the region Championship the Cougars were now a team to reckon with and Coach Henry kept his promise from early in the season to shave his head if we won the region again and  thus we broke out the shears. Our next contest was against MD Collins for the Area Championship and they were no contest. All of this leads us up to the moment we will never forget. Waycross had been #1 in the rankings most all of the year and were heavy favorites to win the game. The Cougars were up to  the task. The game was close but 6 fumbles and 2 interceptions really put the game out of reach but it was the last fumble with about a minute to play, while we were inside their 10 yard line  that was a back breaker. The following week Waycross annihilated Columbia County 46-13 and given they beat us 13-7 in the South Georgia Championship. The Cougars pole-vaulted over Columbia in the Atlanta Journal final rankings finishing #2 and the highest final ranking in Crisp County history. So when yall hear me say the “glory days “ well now you know the rest of the story. That has been almost 35 years ago and those memories of our team and fans still gets all of us that were there talking. Let this be a lesson to the young. No matter where you go or what you do in life. If you ever play on a high school “Ball” team, if you put out  your blood, sweat and tears with friends, you will never ever forget it. I know I certainly haven’t. 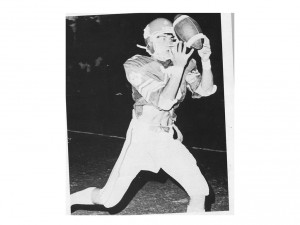 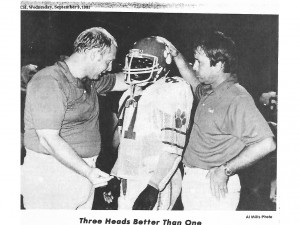 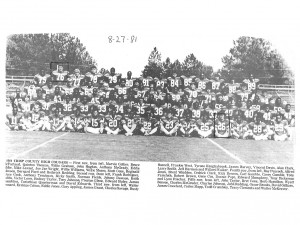 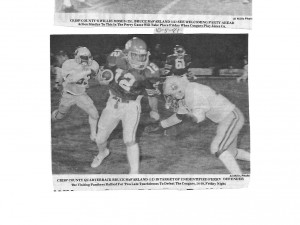