Where They Now: Tommy Dozier and Bobby Roche

Back in 1978 The Crisp County Cougars boasted a pair of studs, one on the mound and one  in the  outfield and the Cougar Quarterback . Having grown up in Cordele and playing baseball all their lives it was not surprising when the best Junior College in America wanted both of them to come play in Cochran, Ga.  Coach Robert Sapp of Middle Georgia College signed Tommy Dozier and Bobby Roche to a scholarship. “That was a great day when we picked up them two guys they loved baseball you could tell.” “I remember how big Tommy was and throwing left handed was a big plus.” “ Bobby was a natural leader but I will never forget those two grand slams he hit in the same 7 inning game, it was rare occurrence, ”said former Head Coach Robert Sapp.

It was way back in 1972 when Bobby   and  Tommy aka  Dough Boy were on the Little League Braves that their baseball prowess really began. The undefeated team they played on went 15-0. Well they should have, they had nearly every good player in Crisp County on the same team, I guess some coaches back then didn’t know how to draft. In high school the duo played on a pretty decent Cougar baseball team but back then they had to play against 1 AAAA powers Valdosta, Lowndes, Tift and Moultrie . As the Quarterback for the Cougars his Senior year Bobby said his best memory was the victory over Lowndes County 14-7 when they were a ranked team. Bobby was the MVP of the Crisp County Cougar Baseball and Football team. His accolades would accumulate in college as he was an all JUCO player, team Captain, Valdosta Red Sox Hall of Fame and many many more to numerous to name. Tommy was a left handed hurler who was recruited by nearly every SEC and ACC school in existence but chose  Middle Georgia over all of them mainly due to the proximity to home. Tommy was a star on the American Legion State Champions and of course the National champion Middle Georgia College team of 1979. Tommy would also go on to play semi pro ball for the Valdosta Red Sox. Both Bobby and Dough Boy graduated from college Bobby from Valdosta State with a Bachelors in Fine Arts /Communications and Tommy from Georgia Southwestern with a BBA Management/Marketing.

In the days that have passed from their playing days both guys went onto success in Business and family. Bobby married the former Karen Dufek of Valdosta, Ga. and they have four children twin sons Davis and Bryant , Daughter Julianne and the youngest is son Severan. “ My children actually blow my  mind with their talent and intellect, they make any accomplishments of mine appear insignificant,” said Bobby. Tommy married the former Pam Collins of Cordele and they have two children Heather and Drake both of whom are college graduates or attending college. Bobby is self-employed as President of Southern Surgical Consultants, Inc. and Tommy is an Independent Insurance Agent. Bobby says that “   the very best memories he has are the friendships that he made growing up in Cordele and his deep appreciation of parents that truly encouraged him and his siblings to play every sport they wanted to.” His parents are Jack and Nancy Roche of Cordele.

Tommy nearly duplicated Bobby’s sentiments, “ growing up and playing ball with all my friends are memories you will never forget,” said Tommy. Dough Boy is the son of the  late Donald Dozier and his mother Gloria lives here in Cordele. In this never ending book of sports legends in Crisp County let’s name chapter “78” the  “Dynamic Duo”, and history can decide who was Batman and who was Robin. 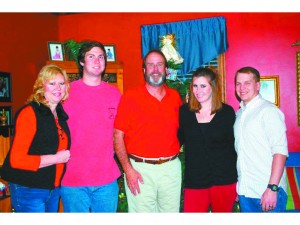 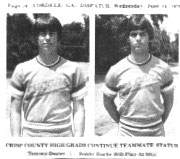 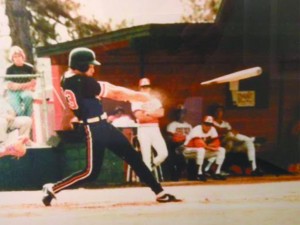 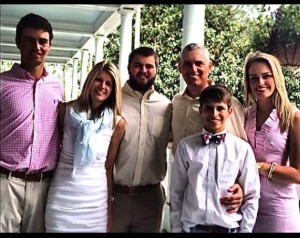 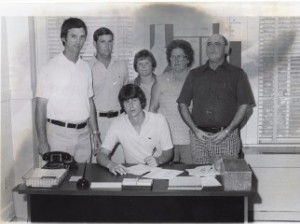