Wildcats Back In Action

The Crisp Academy Wildcats were back in action  Tuesday against Citizen Christian and they came away with a win 4-2, after about 2 weeks off.

The Big Cats traveled down to Douglas, Ga. and gave the ball to William Purvis who started the pitching performance for the Cats. Purvis went 3 innings striking out 2 and waking 2. He was  relieved after a good performance by William Bodrey who went 3 innings striking out 2 and walking 2. In the 7th inning Garrett Holt came on to get the save striking out 1. All in all the Cats pitching spread out three hits over 7 innings. On offense Purvis, and Holt collected two safeties each and Donnavan  Dorough  and Freshman Dylan Farmer banged out a single each. Farmer also garnered a RBI. ”The boys played good ball and we got good pitching from Purvis, Bodrey and Holt, especially having been off so long, “ said Head Coach Chuck Hester.

The Cats also played Tift Area on Thursday at home, losing an 11-9 decision. “ I was proud to see the boys battling back against a big AAA school after falling so far behind, “ said Hester. “ It’s the little things we have work on.” 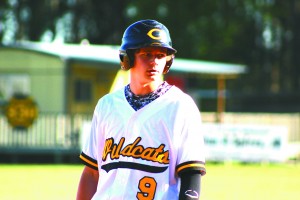