Where are they Now: Wilcox County 1968 State Champions

Looking back through time to the fall of 1967 the new Wilcox County High Patriots were about to embark on their glorious run in basketball. This would be their only State Basketball Championship and it would be 41 years before they would play for another one.

Led by their All- Region player Michael McGlamory and a host of returning lettermen and starters Wilcox New Head Coach Lyndon Gordon would have his hands full. First of all learning  a new system and winning a state title all in the same year is a tough thing to do. Starting off the season off at Cochran with a win the Patriots would do a lot of that the rest of the season. The 1968 Class B state champions were not perfect they lost a few games 7 to be exact. Two losses came at the hands of Crisp County High, one loss to Fort Valley one loss to Twiggs County and three losses at the hands of the Vienna High Cubs. The same team Wilcox would later beat to win the State title game. To further handicap the 1968 Patriots, their new Coach was a football coach and new nothing about basketball by his own admission.

The Patriots would spend months beating teams from all over this area including Crisp , Vienna, Ashburn, Cochran, Fitzgerald and many others. For most of the year the Vienna High Cubs would maintain the #1 ranking. Not only did  Coach Glenn Cassell’s boys own Wilcox during the year their wins were by a significant amount. 7 points in one game , 13 in another and 29 in yet another. Playing for the region championship that year Vienna defeated  Wilcox 61 to 48. Both Vienna and Wilcox qualified for State play as a result of their 1st and 2nd place finishes in region play. As the Patriots reached the  State play offs they began to gel and become a force to be reckoned with.  First up for the Patriots was Early County who had2 losses total to date and also had shared that number 1 ranking during the year. It didn’t take Wilcox long to put Early County in a hole and out of the tournament. Led by McGlamory’s 26 points and  John Wayne Dalton’s  23 point explosion the Patriots won easily 79-62. Next up for the Patriots would be Mary Persons from Forsyth, Ga. The Bulldogs came into the game with an average record at best 15 and 11 but they came to play and put up a fight they did. In this game Wilcox scoring was again led by Mike McGlamory with

22 points and the Patriots squeezed by Mary Persons 57-53.

Wilcox would not lead in this game till the very end. Playing against a 4 time State Championship team in  the Vienna High Cubs. Then with 20 seconds on the clock the ball was inbound to Al Crenshaw of Wilcox. Crenshaw drove down and made a kind of a “lay up/ 30 foot jumper” to go up 63-61. “Actually folks remember stuff differently but it was a lay up,” said Al Crenshaw. “ I think  that Vienna thought I was going to pass it off to McGlamory, Dalton or maybe David Shell but I wasn’t thinking and I drove in and shot,” Crenshaw  further lamented. Vienna got the ball with about 4 seconds and missed a long shot and the rest is of course history.

When you think about the fact that your coach who is responsible for making adjustments to the team and telling you what to do to get better really isn’t a basketball coach but is a football coach, add in your playing a Glenn Cassell team that has won 4 state titles and beat you 3 times this year already. The 1968 Wilcox Patriots  even though they had talent were a true Cinderella team. 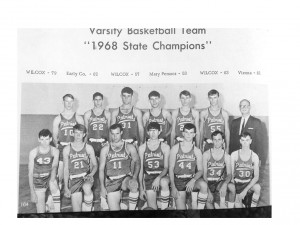 Crisp Academy Runner up in Region