The Crisp County Cougars won both of their last two region contest to finish 13-7 in region play. However, Fridays late matchup between Bainbridge and Cook County is crucial. If the Bearcats win Crisp is in the playoffs by virtue of an advantage over Cook in the tie breaker. If Cook County comes out on top then Cougar season ends by virtue of Bainbridge has the edge in the tie breaker over Cordele.

The Cougars didn’t take much time in putting the winless Dougherty County away Wednesday by a score of 16-2. Jacob Hughes got the win in the lopsided affair and the Cougar offense was led Will Carter who was 2 for 2, Dagan Kennedy was 2 for 3 and Chris Pollock socked a homerun. On Thursday the Cougars traveled to Westover of Albany and handed them a 12-1 shellacking . Will Carter got the win with 7k’s and the offense got a season high 16 hits. Leaders at the plate were Pollock going 3-5, Austin Walls 2-3, Kasey Herrington went 3-4, Adam Burnett banged in 2 hits as did Carter on their way to the win. 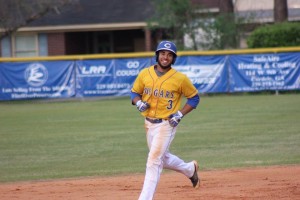