The CCHS Lady Cougar Tennis team secured a spot in the 2016 GHSA Sweet 16 Tuesday. The girls traveled to Covington to take on the region 4 #2 seed Eastside High.The wins started with #2 singles Morgan Lawson quickly defeating her opponent in straight sets. The success continued with a win from #1 singles Jordan Farmer in a tough 3 sets. The team victory was sealed with another W at # 1 doubles from Laura Bertelson and Ansley Mitchell. The # 2 doubles pair of Shelby Farrar and Audrey Mercer came up just short in a hard fought 3rd set tie break. #3 Singles Madison Barber was up a set and on her way to our 4th win when the match was called.

This victory against the Eastside Eagles continues a long running streak of first round state playoff wins for the Crisp County Tennis team. Our Lady Cougars head to North Oconee High near Athens for their second round match next week. 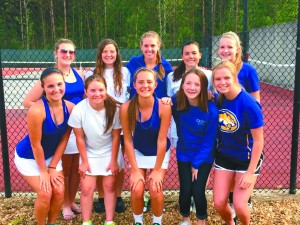