before taking the field for their final home game. Trojan fans showed their appreciation for Logan Priest,

Will Smith, and Ty Tyndal, speaking of the love of the Fullington family that would go along with the young men as they begin their college careers.  Unfortunately the boys did not leave the field with a win over their opponent, the Tiftarea Panthers.

In order to preserve pitching for the state playoffs that begin Friday, Fullington utilized several of their pitchers.  Sam Evans, Ty Tyndal, and Will Mashburn each pitched two innings, and Will Smith took the mound in the seventh inning.   After Tiftarea scored one run in the top of the first, the Trojans posted two runs of their own.  A single by Russ Taunton and a walk for Ty Tyndal positioned base runners on the field, and both crossed the plate after a two RBI single by Sam Evans.  After the first inning things got a little ugly for the Trojans.  The Panthers would gain four runs in the second inning and three runs in the third while keeping the Trojans from putting any more runs on the board.  But you can’t keep the Trojans down as they came back fighting, preventing the Panthers from scoring in the top of the fourth inning, and bringing their bats to life in the bottom.  Lane Mitcham led things off with a single, followed by

Tyndal across the plate, moving the score to Trojans 4, Panthers 8.  The fifth inning brought two more runs for the Panthers, and although Maxwell Denney and Priest both snagged a single, the Trojans would not score.  The same was the case for the sixth inning as well, no runs for the Trojans in spite of a walk for

Taunton and singles from Mashburn and Evans.  It was in the seventh inning that the Trojans would truly redeem themselves for an exciting finish for the game.  Dalton McLeod came up to bat and delivered a single followed by a walk for Priest.  Hunter Hughes then slammed a two RBI single, and eventually

crossed the plate after a clutch RBI single from Taunton giving the Trojans seven runs on the board.

Mashburn then reached first on a bunt, advancing Taunton into scoring position.  Tyndal moved the

runners to second and third on a fielder’s choice and Evans came to bat with a RBI single, scoring

Taunton.  Mashburn soon followed him home thanks to an RBI single from Denney making the score

Trojans 9, Panthers 10.  Although the Trojans put forth a valiant effort, they were unable to score any more runs to overcome the lead built by the Panthers.  Head Coach Jason Hurst said, “Today was a great tune up against a very solid Tiftarea team.  We were a little sloppy early and that ended up being the

difference in the game.  I was very pleased with our at-bats.  When you get 16 hits you’re supposed to win ball games.  We were able to get our top four arms some work today; we should be rested and ready to start a playoff run on Friday. “  Game Stats:  Taunton 3H, 1RBI; Mashburn 2H; Tyndal 1H, 1RBI; Evans 4H, 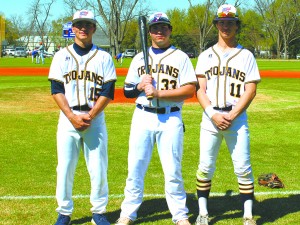 My Family are Fanatics