Do You Remember When: 1995 Cougars

In the fall of 1995 the Crisp County Cougars began a season with confidence and caution. Coming off a 4-7 record the Cougars had talent and thoughts were they had a chance to be good. Starting the 5th season under Head Coach Clay Hill. Crisp County got off to a great start by beating their number one nemesis Americus High 26-7.

For those that are unfamiliar with this rivalry beating Americus can make your year all better even if you lose every game. Kind of like Georgia vs Georgia Tech. Following a win like that the only thing that can make the season better is to go down to Sylvester and beat Worth County which the Cougars did 15-7.

It was apparent now the Cougars had a good team after all Worth had just beat Tifton the week before. All in all that year Crisp County beat a lot of good teams. Next up came Westover in Albany a 34-0 thrashing and then lopsided devastation of Dooly County 59-7. Turner County got whooped 31-3 and the Cougars stood at 5-0.

“We had a very good nucleus of coaches and hard hitting kids,” said Coach Jeff Wilson, the only remaining coach from those days still on staff at Crisp County.” We knew we were good we just didn’t know how good.”

Next up for the Cougars was a home game against former Cougar Head Mentor Sam Barrs and his 4th ranked Dublin Irish, who where coming off a state runner- up

performance from  the year before in 1994. The Cougars checked in ranked 9th in

they had been in the rankings since 1989. Some how the hype got the best of Crisp County and Dublin came out on top 35-21. After that loss a fire got built up under them “Cats” and they would run off 7 straight wins.

Appling County 25-14, Jones County 33-0, Wayne County 38-13 and the last regular season game against powerful Peach County was a 21-14 Cougar win. The Cougars were headed into the playoffs with a 9-1 record, a smile on their face and the history of Crisp County Football riding on their shoulders. “ The 1995 team is one of the best if not the best in school history. We had a lot of great players on that team and many went onto play college football. I am proud to have been a part of that team, we packed Cougar Den every Friday night,” said Cougar Head Coach Shelton Felton. First up for the Cougars was a region playoff against Sam Barrs and the Dublin Irish. The only team to put a blemish on Crisp County’s near perfect record. In a defensive battle the Cougars came out on top 10-3. Next up came Burke County in round one of State. Crisp dismissed the Bears of Burke 20-6 to advance to the quarterfinals. Then came the game that really had most of us fans a little nervous, Cairo! The Syrupmakers more so than any other team have always owned us going back to 1936. Combining Cordele High School and Crisp County High we are on the south side of a 49-9-1 record against them. Well the great thing about history is when you make it and the Cougars did it that night in Cougar Den 25-13. “We had a great group of coaches on that team, that went onto individual success,” said Clay Hill former Cougar Head Coach. “The one thing though that still sticks out to me about the guys in general was their vicious hitting.”” We had to make them tone it down in practice or hurt our own people, we started with 55 kids and ended with 55 and that’s hard to do,” Hill further explained.

Georgia Dome Bound– In what is Crisp Counties only trip to the Georgia Dome to play in the Semi-Finals the Cougars were cocked and loaded like a .44 magnum. Up next was Cedar Shoals of Athens and the Cougars wasted little time on them. In the first half the Cougars went up 21-3 and had a chance to go up 28-3. On a play that will forever be questioned by the Cougar faithful and even by coaches themselves. Crisp County was at the 1 yard line with arguably one of the best running backs in the State, Derrick Ray. We passed the ball and it was intercepted. Now whether or not it was right or wrong is really not a question that can ever be answered for instance. If Aaron Murray had spiked the ball against Alabama in 2012 maybe the Bulldogs win and get to play Notre Dame. If Jamie Chambliss is left into run the ball in 1981 against Waycross maybe we win and play for a State Championship if Seattle runs the ball at the 1 yard line in the Super bowl against New England then maybe they win as well. The truth is none of us will ever know and armchair quarterbacking shall forever be a part of football.

Head Coaches have to make decisions and sometimes you don’t get to think about it very long, as the old saying goes “that’s why they pay you the big bucks.” The Jaguars got the momentum going into the second half and as Coach Hill kept telling the boys they are a good second half team. The rest is as they say history, the Cougars lost to Cedar Shoals 27-24 and went onto finish 3rd in the final Atlanta Journa-Constituiton poll. The 1995 team also owns a record  (12) for the most wins in a single season by any Crisp County team. Next year starting in the fall of 2017, Crisp County High begins its 60th year of existence. A few times in our history, The Cougars, the Rebels and the AS Clark Rams had teams that could have won it all. Alas the football gods did not see fit for that to be the case. However, a young kid on that 1995 team now leads the Cougar faithful and all the weight and hopes of our past weigh heavily on his shoulders. Good thing he is a big man with broad shoulders, yall can do it Shelton! GO COUGARS!!!!!!!! 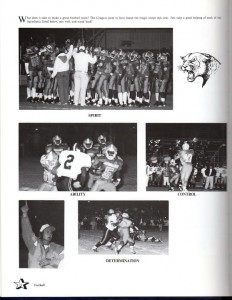