Where are they Now: Wayne Rollins

Most likely the name “Tree” Rollins” doesn’t need any introduction around these parts. By far the most widely known athlete from this area, Tree was a phenomenon standing 7’1” tall.  Tree started his basketball career as a freshman in high school and played for one the best teams in Crisp County basketball history. One of six kids Tree would help Crisp County in dominating style defeat some of the very best basketball programs in Georgia. From winning the Christmas Tournament in Albany, Ga. to their final game against all-powerful Southwest Macon. The Crisp County Cougars would go on to a record of 23-4 and play before sell out crowds every night. Why would you play to a sell out crowd every night, because you had a 7’0 basketball player that was being recruited by every major college around would be one reason.

“I was very fortunate to have been there playing at a time when we had a player like Tree, he was really something special to watch,” said teammate Cliff Hearn. “Huge crowds everywhere we went, because everyone wanted to see him.”

“Just about everyone wanted Tree in college,” said his former Head Coach Bub Denham and “ why not he was a great player”. “I remember when he was younger though and Tree had to work at his game, it was amazing to watch how hard he worked and developed himself into the player he became,” Denham said. “ One thing I remember was back then you couldn’t dunk a basketball or shoot down at the rims top so sometimes Tree would get called for simply laying the ball in the basket, that got frustrating.” “ Tree was a really good guy and excellent teammate,” Denham further lamented.

Tree would graduate Crisp County High in 1973 and headed up to Clemson on a basketball scholarship.

“Tree Rollins ushered in a new era in Clemson basketball when he matriculated to Tiger town for the 1973-74 season. He changed the image of Clemson basketball more than any other player under head coach Tates Locke. At 7-2 he was a shot-blocking phenomenon who burst on the national scene in just his second game when he had 22 points, 20 rebounds and nine blocked shots against St. John’s. Rollins started 110 games in a row, a national record at the time. His sophomore year, 1974–75, he joined forces with Skip Wise to take Clemson to its first top 20 final ranking and its first postseason NIT tournament bid. The Tigers defeated 3rd ranked Maryland, 10th ranked North Carolina and 4th ranked NC State at home. Wise was named first-team All-ACC the first true freshman in league history to obtain that honor. Bill Foster was brought in to further build the program. He had an impeccable reputation and was coming from a UNC Charlotte program that he started in 1970. When Rollins decided not to turn professional, Foster and Rollins motivated the Tigers to 22-6 record, the program’s ninth straight year with an improved winning percentage. Prior to his final game, Rollins had his #30 jersey retired, the first athlete in Clemson history so honored. It was a fitting way to honor Rollins who averaged a double-double for four years and is still first in ACC history in blocked shots, before starting his 18-year career in the NBA,” as quoted from Wikipedia.

Many of you already know about Tree and his fantastic NBA career beginning with the Atlanta Hawks, Cleveland Cavaliers, Detroit Pistons, Houston Rockets and the Orlando Magic. However, after his playing days were over and he had jerseys retired here in Cordele and at Clemson and also he has been inducted into all kinds of hall of fames he started coaching. Beginning as a player coach in Orlando, Tree would go on to help develop the talent of future super stars like Shaquille O’Neal and Darryl Armstrong and continue on in basketball as a bench coach in the

NBA and a Head Coach in the WNBA. Through the years Tree has received so many accolades as a player and coach you just can’t name them all. When asked his most precious sports memory Tree said” playing and winning a gold medal in the Pan-American games in 1975 was just an awesome time in my life, I will never forget it.” Now days Tree makes his home in Apopka, Fla. just outside of Orlando with his wife, children and grandchildren.

In proving the fact that you are never to old to finish Tree Graduated last week from Clemson University with a B.S. in Science over 40 years after he started much to he and his family’s delight. We are proud of you Tree!!! A whole book could be written on the life of Wayne “Tree” Rollins but it will have to wait because Tree and his adventures are far from over. It is suffice to say that he was a star basketball player and a true blue example of a hometown boy that went off to become a man of his own. Crisp County salutes its favorite son Wayne “Tree” Rollins. 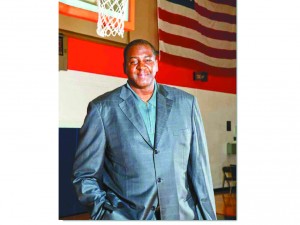 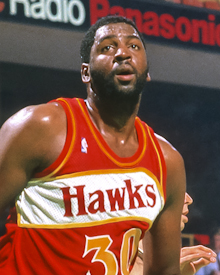 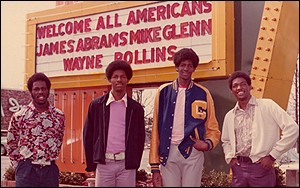 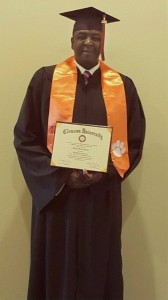