The Fullington Academy Trojans traveled to Louisville on Friday to compete against the Thomas Jefferson Jaguars for the GICAA Baseball State Championship, but walked away runner up.  In the first game the Trojans did not score until the fifth inning, and at the top of the fifth the Trojans trailed the Jags by only two runs with the score Trojans 1, Jaguars 3.  It was in the bottom of the fifth that unfortunate Trojan errors helped the Jags gain four runs that would bring the score to Trojans 1, Jaguars 7.  By the seventh inning the Trojans had gained a couple of runs with the Jags gaining only one, but a couple of runs would not be enough for the Trojans.  Game one ended, Trojans 3, Jaguars 8.  Game 1 Stats:  Russ Taunton 1H; Ty Tyndal 1H; Sam Evans 1RBI; Colin Infante 1H; Max Denney 1H, 1RBI; Austin McKinney 1H;

The second game seemed a bit more promising for the Trojans.  Neither team scored in the first and second innings, but the Trojans pulled ahead of the Jags in the third inning scoring three runs against the Jags’ one.  Neither team scored in the fourth inning, but by the end of the fifth inning the Jags gained four runs with the Trojans adding only one.  When the Jags gained another run in the sixth and the Trojans failed to score, the inning ended with Trojans 4, Jags 6.  The Jags scored two more runs in the seventh inning, and the Trojans fought to recover, but it just did not happen.  The second game ended Trojans 5, Jags 8.  Game 2 Stats:  Mashburn 1H; Tyndal 2H, 2RBI; Evans 2H, 3RBI; Infante 1H; Dalton McLeod 1H

Coach Jason Hurst stated, “They showed up to play, we didn’t.  I wish I could sugar coat it but that’s the truth.  I’m proud of my guys for a great season, but we didn’t show up to play Friday, plain and simple.” 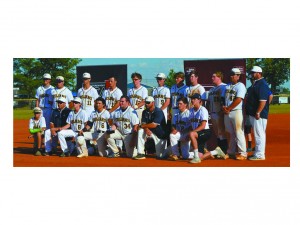 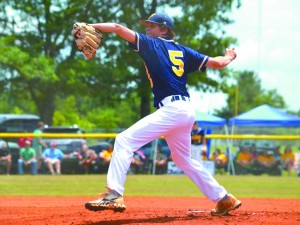