Shealy made the best of his Scholarship

Trevor graduated in four years with a pre-med degree in biology.  He has been accepted to The Southern College of Optometry in Memphis, Tennessee where he will pursue his medical degree in Optometry this Fall.  His plans are to complete his degree in Optometry and then open his own private practice.  Trevor is the son of Ken and Angela Shealy of Cordele.  Both of his parents are educators and taught at one time in the Crisp County School System.  His father is currently the Headmaster at Fullington Academy and his mother is an educator in the Tift County School System.  He has one brother, Braden Shealy, who is currently attending Lagrange College where he plays baseball.

Trevor played football all four years of his high school career at Crisp County where he was a Scholar Athlete.  He graduated with a 3.8 GPA.  Trevor was named All Region and all State during his career.  In his Freshman Year under Head Coach Tommy Walburn, he was the starting J.V. Quarterback and served as the varsity backup Quarterback.  The team made the State Playoffs but lost out to Carver of Columbus in the 1st round.

During his Sophomore Year, under Coach Walburn, Trevor broke his collarbone in practice the week before the season opener.  He was out most of the season but was able to come back and started at Quarterback the last three games of the season.  Although Coach Walburn’s offense of choice was the Wing-T and focused on running the ball, Trevor was able to pass for 225 yards and a couple of touch downs.  The team did not make the state playoffs his Sophomore Year.
In his Junior Year, under new Head Coach Sean Pender, Trevor had the best year of his career passing for 1, 975 yards and 19 touchdowns.  He led his team to the state playoffs but lost to Burke County in a nail bitter on a cold night that saw the cougars dominate the field most of the night only to lose by two points due to turnovers and missed opportunities.

By the time Trevor’s Senior Year rolled around, the cougars had made a coaching change and were under the direction of Coach Lee Campbell, who had taken the Hawkinsville program to two state championships in previous years.  Trevor had a good year passing for 1,785 yards and 18 touchdowns but the Cougars were not able to beat a strong Worth County Team that kept them out of the state playoffs. 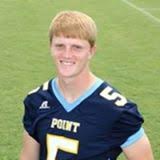