Do You Remember When: 1983 Dooly Bobcats

From the moment Head Coach Phil Jones moved into Vienna, you could see the excitement in the air in Dooly County. The Vienna Vikings and the Unadilla Blue Devils had just joined together to form the Dooly County Bobcats. In 1980 Vienna went 8-2 and Unadilla went 7-3. Then in 1981 Phil Jones was hired and they joined the two schools together to make the Dooly County High Bobcats. They promptly went 10-2 that year losing to a powerful Mitchell County team 14-12. The next year was a little more of a rebuild as the Bobcats posted respectable 7-4 record.

Then in the fall of 1983 Jupiter, Pluto and the star Alpha Centauri all lined up with the Andromeda galaxy and the Dooly County Bobcats were poised for their best ever season. Starting with a blowout of Wilkinson County 41-0, the true test for Dooly came in the 2nd week when they dispatched rival Crisp County 21-7 which of course was a much bigger school. Then a trip to always-strong Turner County resulted in a 3-0 record for the Bobcats. The next three games Dooly County tried to call of the cats but even the little freshmen kittens were killing those teams. Dooly outscored Stewart-Quitman, Telfair and Randolph – Clay 168-0. It seemed that no matter who they played that year even their really big rivals, Dooly just whitewashed them all.

“It was obvious to all by the end of the 6th week this Dooly team was something special,” said Robby Stripling. As a matter of record Dooly outscored their opponents thru the first 14 games that year 567-79.

As the playoffs began the entire area was buzzing about them Dooly Bobcats. First up for Dooly in the playoffs was Terrell County in the region semifinal a 67-7 shellacking. Then came All-powerful Seminole County in the region championship a 55-6 beat down. By the time the state playoffs began in the Quarterfinals Dooly hosted Manchester on the coldest night of the year were temperatures dropped to around 14 degrees. The Bobcats escaped with a 7-6 win to advance to the semi finals. When you play Larry Campbell’s boys over in Lincoln County you have to bring you’re “A” game.

The gold standard by anyone’s estimate is Lincoln County. The Owners of 14 state titles including Lincolnton, only the mighty Valdosta High has more. Dooly fell behind at half time 8-0 and Lincoln looked poised to win their 59th consecutive home game. “ Get your heads up,” said Head Coach Phil Jones “one good play is about to turn this game around.” Speaking to Tyrone Adkinson, Coach Jones said, “ I need one good block the 21 counter been open all night.” Bruce Wade went 80 yards off Tyrone’s butt and the comeback was on. Dooly wins it 20-8.

For the first and only time in Dooly County, Vienna High, and Unadilla High and or any other school in the county’s history, the South Georgia Champions were 14-0. Then came the long trek to Rome, GA. to take on West Rome who was also undefeated. It was not the Bobcats night as the Cats and their season ended on a 35-0 thumping by West Rome. I really don’t believe that anyone thinks that Rome was 35 points better than Dooly. The Bobcats were a true single A school playing in AA ball, a team built for speed and no size at all. The Bobcats wishbone offense had carried them to the pinnacle of Georgia High School Sports. The Bobcats would make it back again to the show in 2002 but that is another story. Dooly County has had many great athletes throughout the years in that year alone 3 made all state. So get the picture now you are in the “Grove” in Vienna, Ga. and the entire Dooly County crowd yells out in along yell Dooooooooooolyyyy”. It just don’t get no better than that.

Special thanks to Robby Stripling and Tyrone Adkinson for helping in this article. 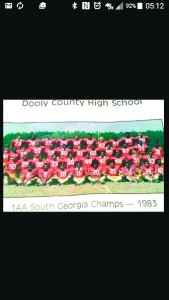