A house hold name in these parts when it comes to baseball Robert Tyler will soon be a state favorite in Colorado. Drafted 38th overall in the 2016 draft by the Rockies. Tyler will be taking his talents West  to help the ailing Rockies. In the high school and  college ranks Tyler has been a dominate force. We are all anxious here in our little hamlet of Cordele to watch him grow into a MLB star.

A 6-4, 226-pound right-hander from Cordele, Ga., Tyler went 3-5 with a 4.10 ERA in 14 starts for the Bulldogs in 2016, registering 89 strikeouts in 74.2 innings. He ranked third in the Southeastern Conference in holding opponents to a .200 batting average.He earned the Louisville Slugger National Player of the Week honors after tossing a one-hitter in beating No. 21 Alabama 7-1 on April 1. He carried a no-hitter for 8 and two thirds innings against Alabama until allowing a pinch-hit solo home run. In that start against the Crimson Tide, he had a perfect game through 6 and a third innings.

He got a no decision against No. 2 Florida when he limited the Gators to one run through 8and a third innings with nine strikeouts in Gainesville.In his career, Tyler is 10-10 with a 3.62 ERA and 182 strikeouts in 179 innings.

Tyler went in what is known as the “lottery round A” that is at the end of the first round. Maybe they will trade him back to Atlanta so it is easier for all us to go see him play one day. 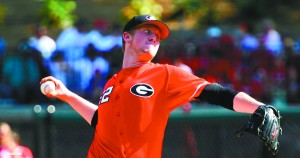