ALBANY, Ga.- The advisor of the Albany State University Student-Athlete Advisory Committee (SAAC) will serve as chairman of the SIAC SAAC Advisor’s Association for an unprecedented stint. Stan McCormick was selected as the chair of the conference’s SAAC organization for a fourth consecutive two-year term.

“I am humbled and appreciative of the opportunity to serve the schools in the SIAC and represent Albany State University,” said McCormick.  “It is a good feeling to know that I will have an impact on the well-being of student-athletes.

“I am indebted to my fellow SAAC advisors in our conference to have the confidence in me to lead this association once again. I look forward to working with the SIAC staff to produce an even more effective SAAC program for our conference.”

“Coach McCormick is the big push behind the Citizenship Award and our community service,” Dr. Richard Williams, ASU Director of Athletics, said. “He makes sure that every student-athlete in our program knows we are a community-driven institution. The community gives so much back to us, and he directs them to give back to the community in various ways.”

Albany State generated over $2700 for the Make-A-Wish Foundation and also participated in over 30 community service projects during the academic year to win the award. The institution’s top projects included the SAAC-Health and Human Performance (HPP) Blood Drive, Rivers Alive Clean-Up, Ram Reader Visits at local elementary and middle schools and a host of other events.
McCormick, who has led the ASU SAAC for the past nine years, says winning the award generates important factors for ASU Athletics and the university.
“Receiving this award is a giant accomplishment for two reasons,” McCormick stated. “First, it brings a lot of prestige to our athletics department and to our university. We had several faculty, staff, students and alumni of Albany State who were beneficial in our success this year.  We are grateful for their assistance and devotion to our cause.

“Secondly, winning this award speaks volumes of the work our SAAC members and their teammates conducted throughout the year,” McCormick said. “For student-athletes who have full course loads, practice schedules and competition on a daily basis and still put themselves aside to give back to the community says a lot about their work ethic and character.  I am extremely proud of this group for their efforts.”

A native of Rochelle, Ga., McCormick is a 1995 graduate of Wilcox County High School. He is the oldest son of Nehemiah and Rosa McCormick and the grandson of Susie Johnson of Cordele and Leroy Johnson of Valdosta, Ga. 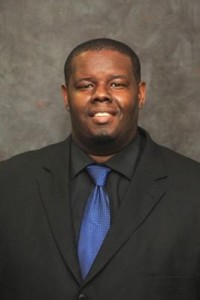