Where are they Now: Gene Cox

When I was in high school we had a few big boys. Odie Gene Cox was one of them cruising in at around 300 lbs. Gene was our big boy. I have often joked that Gene got credit for my tackles since I played nose man the on defensive line. When we got to watch film all you could see was Gene swarming over the runner and my little short self couldn’t be seen. Anyway that’s my story and I am sticking to it!!

My friend Gene Cox was  a big ole country boy and loved to inflict punishment on running backs. Now when 300 lbs. crashes down on you it hurts!! Gene was tagged with duty of a two-way player playing offensive line for which he received all region accolades and defensive tackle, which he really enjoyed. For those of you not familiar with football. When a player goes both ways a whole game it is exhausting. For smaller athletic guys it is an easier task. However, for big boys like Gene running for 48 minutes in a football game is nothing but near impossible but he did it. Oh he came off the field but The “Go” offense and goal line defensive lines were anchored by the Arabi resident.

“Gene was tall and big and it took him a little while to get his feet under him, but when he did he was really something special to watch,” said Former Cougar Head Coach Ferrell Henry. “Gene truly had some great games for us.”

Big Gene as many of us would say was a terror on the field and really a gentle kitten around the school and town. That is unless you got him riled up.

“Playing against Waycross in the South Georgia Championship is the game that sticks out the most to me,” said Gene. “We literally gave away a state championship!”

“However, running ten Cougar alleys for some us having our shirts out at a pep rally is the one event I remember the most, it was a turning point for us that season.”

Gene was recruited by several colleges including Florida State, Florida A and M, Liberty, Ole Miss and Pittsburgh to name a few. He ended up going to school at Northeastern Mississippi Junior College. After college Gene went to work for the Georgia Southwestern Railroad where he became a train master. Then in 1994 he transferred to Dallas, Texas and went to work with the Garland Northeastern Railroad. In 2014 Gene accepted the job as General manager of the Arkansas Midland Railroad along with a conglomerate of 6 other railroads in Hot Springs, Arkansas where he lives today. Gene is the father of two daughters Kristen who lives outside of Atlanta and Kerri who lives in Dallas, Texas. He has a stepdaughter Kortney who lives in Tulsa, Oklahoma and a stepson Nicholas that lives in Hot Springs. Gene met his wife the former Fonda Wilburn of Beggs, Oklahoma. Gene and Fonda have one granddaughter Hallie.

“I can remember vividly how well Gene would fill up the holes in the defensive lines and stuff the runners he really anchored down that line,” said former teammate Jamie Chambliss. Now days Gene enjoys horse racing, hunting, golf and of course football. For many years he enjoyed playing and coaching softball games as well. “I will remember with great fondness my days at Crisp County High playing football and all my old friends and coaches,” said Gene. Of my friend “big” Gene let me say that he was   always a great guy to be around and a good friend. Chapter “82 of the book of Cougars let us insert the name Gene Cox number 70 another great “Cougar “so let it be written so let it be done. 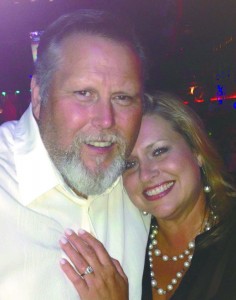 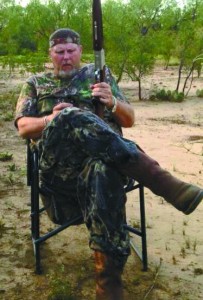