Do You Remember :The Big Cats at CA

How many of you remember in 2001 when the terrorist attacked America on 9-11. That historic date was sandwiched between two Friday nights of Crisp Academy football a 34-0 win over Twiggs Academy and a 28-12 win over Robert Toombs. This after having already peeled off two early season wins over Central Fellowship and another 34-0 victory laid on John Hancock.

The Wildcats won a contest against David Emanuel 48-21 and were 5-0 at the midpoint of the season. At this time Head Coach Mike Roobins squad faced of against some much larger schools in Southwest Georgia Academy, Westwood and Terrell Academy and now they stood 5 and 3. After escaping with a win down in Valdosta against Valwood, the Cats tackled their last region game at home against Westbrook. The Cats came away the winner and finished with a perfect 4-0 in region play. Crisp drew teams they had already played in Robert Toombs and then David Emanuel in the playoffs and ran through them to win the Single A state crown. “I just remember Hagen Hearn saying after the Valwood game we going to win state,” said Michael Miller former player.

As much as the Wildcats 9-3 season and a first ever state title in Football was huge in 2001, the following year in 2002 would be even bigger.

Crisp would drop their next game to Brookwood 23-18 beat Valwood 20-14 and Thomas Jefferson 45-14 before losing two more games to powerful Southwest Ga Academy 24-6 and nemesis Terrell Academy 20-6 to finish out the regular season. With a 4-1 record in the region the Cats would draw John Hancock in the first round of state and after dispatching them28-8 and traveling to Robert Toombs and beating them 9-0, the rematch was set.

All that stood between the Crisp Academy Wildcats and a back to back State title run was a win over Terrell Academy down in Dawson, Ga. and this was one thing Crisp Academy had never done in football, beat Terrell. Michael Miller said, “ After we knew we would be playing them we never had a doubt on winning this game.” “Coach Roobin was the right man for the job to lead us, he valued morals over anything”, said Miller.

“Mike was a no nonsense and no compromise on discipline coach,” said long time friend and assistant coach Cliff Hearn.” He was hard on you but everyone loved him,” said Nephew Brandon Roobin. When the smoke cleared on that Friday night all those years ago the Crisp Academy Wildcats were again Champions of the State of Georgia with a 24-15 win. Jerry Garden told me about the unique situation that he and Mike had back in them days. He was the Headmaster and Mike the Head football coach and Jerry served as his Defensive Coordinator from 3pm till 6pm on weekdays and Friday nights.” It was different and it worked,” said Garden. “ Mike was very disciplined but they all loved him and his tough love, he impressed me,” Garden further lamented. The following year in 2003 Crisp Academy would go 9-1 in regular season and win region only to lose to a bigger school in Southwest Georgia Academy and then take it on the chin in their third straight state championship against Robert Toombs. The Cats in their heyday set a standard that has never been equaled and as Coach Roobin always said “It’s as Good as gold”. Coach Roobin died in 2010 of cancer, gone but never forgotten. 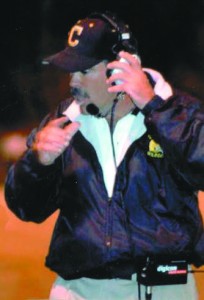