Culpepper Is an All American

The master’s section (for people age 30 and above) of the United States of America Track and Field Association has named Jimmy Culpepper of Cordele an All American in the discus throw for the 2016 season. The USATF is the governing body fir the track and field in the United States and is the sanctioning body for all major competition. His qualifying throw, which occurred at the USATF Georgia Open and Masters Championships in Atlanta, was his best throw in three years, something that happens rarely in the older age groups. Normally people in the older age groups have a steady decline. It is believed that he is the first person so honored from this area since Roger Kingdom was setting records and winning Olympic medals a generation ago.

“Ironically, I placed fourth at nationals in 2014 but couldn’t make All America. I am ecstatic and greatly honored with this award now. I will admit that it was a goal of mine and now I will move on to other goals.” He said. His next competition is in Marietta at the Georgia Games on July 17 and he will wrap up his season at the Georgia Golden Olympics in Warner Robins in September. 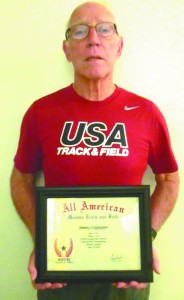