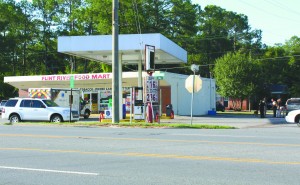 Two armed gunman robbed the Flint River Foods.Subjects are on the loose described only as two black males in their forties. Cordele PD and the Crisp County Sheriff’s Dept. responded.Apparently both suspects were armed and one struck the clerk in the head. The Dispatch will make available the facts as they come in.