The Crisp Academy Wildcats got their 2016 campaign off to a bang with a 26-6 thumping of the New Creation Crusaders Christian Academy on Friday night in Sparta, Ga.

“We started off slow and then came on strong,” said 2nd year Head Coach Price Jones. “ I was pleased with the effort by the boys.” Griffin Gravitt had a good night through the air connecting on 7 of 10 passes for 212 yards and three touchdowns and one rushing TD from 4 yards out. Gravitt’s targets were Blake Odom who had two catches for 66 yards, one of which was a 44-yard touchdown strike. Senior Devin Howard also hauled in two passes for 103 yards. An 89-yard touchdown play and a 14-yard touchdown pass. Garret Holt brought down two passes for 41 yards and Gage Little led the team in rushing with 44 yards on 4 carries. William Bodrey pushed across a two-point conversion to finish the Wildcat scoring on the night. On the stopem side of the ball the exact stats were not readily available but the defense was led by Austin Cobb and William Purvis both of whom had a lot of tackles and Billy Hardin hauled in an interception as did Little.

Next up for the Wildcats will be a home contest on August 26th at 7:30pm in Bobby Davis Stadium, where they host defending state champions Lafayette Christian School. 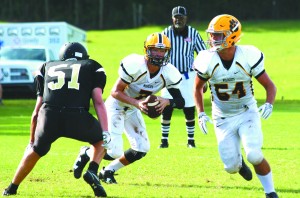