Cat Fight at the Den

The Cougar Den was alive last night as the Crisp County Cougars faced off against the Dooly County Bobcats in the first home game of the season. It was certainly a hot and humid evening when Crisp County kicked off  the ball intended for the visiting Bobcats. Upon reception of the ball, however, the receiver “muffed” the ball, allowing Crisp County to recover the ball and make the first drive of the night. Dooly County was not going to allow this to be a blow over, and they made it evident with several decent defensive plays, eventually forcing the Cougars to attempt a field goal, which was completed for a total of 35 yards, bringing the score up to 3-0 in Crisp’s favor.

It was Dooly’s turn next as they attempted to run the ball up the field, but Crisp’s superior defense allowed no breathing room for the Bobcats, forcing them to punt.  Crisp also attempted to make a play, but eventually Dooly took it from near their end zone. Once again, Dooly tried their best to make some gains, but Crisp stopped them and they once again punted.

The Cougars now had their feet wet and came back with a vengeance, moving the ball for 80 yards with a succession of running plays and made the first touchdown of the night, with a 15 yard run completed by #1, Brandon Dowdell.

After a short run by Dooly, Crisp received the ball via punt in good position and made quick work of another touchdown, a 19 yard run completed by #2, Snupe Troup. After only a two-play run, Dooly’s ball was intercepted by #27, Tavis Greene.  Crisp didn’t make it too much further off of that play and punted. After changing hands once again, Crisp returned a punt for 40 yards, which put them at the 30 yard

line. A few more successful plays and the Cougars once again increased their lead with a 15-yard run achieved by Jammie Robinson. Dooly received the ball but the buzzer rang for halftime with the score at 24-0, in Crisp County’s favor.

Crisp received the ball in the beginning of the 3rd quarter but lost it to Dooly, who after a long, multi play drive, made their only touchdown of the night, a 4 yard run completed by #2, JarQuavious Brown.

The Cougars intended to show Dooly that they hadn’t let up and proved that by making an 81-yard kickoff return touchdown which was ran all the way back by #21,  Kentavious Spivey. Dooly had their first play intercepted by #7, D.J. Smith., and on the subsequent drive, the Cougars completed their final touchdown of the night, a 1-yard run into the end zone by #20, Dakevian Thomas. This would bring up the score to 38-6 in the end of the third quarter.

In the fourth quarter, the ball changed hands a few times but never enough was achieved in order to change the score, so the final score was 38-6, with Crisp County coming out victorious. Crisp County ran the ball well and passed for approximately 190 yards.

The Cougars will be home next week as they face off against Americus-Sumter County in the Cougar Den. 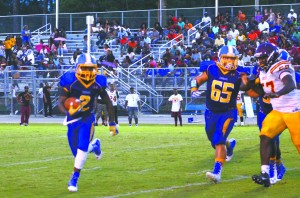 Troup on the Carry.