The Crisp Academy Wildcats got their 2016 season off to a solid start with a home victory over Lafayette Christian on Friday night.

Crisp was off to a good start after kicking off and forcing a Lafayette fumble, which they recovered less than a minute into the ballgame.

They cashed in on the Lafayette turnover with a quick five-play scoring drive that ended in a Griffin Gravitt eight-yard touchdown pass to William Bodrey. The two-point conversion attempt was no good but the Wildcats had an early 6-0 lead just over three minutes into the first quarter.

Lafayette received the next kickoff and subsequently fumbled possession away again. Just one play later Gravitt was able to find Garrett Holt up the sideline for a 22-yard touchdown pass. The Cats missed the two point conversion again but they held a 12-0 lead at the 7:52 mark in the first quarter.

Lafayette responded quickly however, returning the following kickoff all the way for a touchdown. Lafayette added the PAT and the score stood at 12-7 in favor of the Wildcats.

The teams traded punts before Crisp found the endzone again on a scoring drive that ended with a Griffin Gravitt touchdown run from short distance. The two point attempt was converted this time and Crisp had the lead 20-7 near the end of the first quarter.

Lafayette responded with a touchdown of their own to pull the score to 20-13 with 16 seconds remaining in the first quarter.

The teams again traded defensive stops for a couple of drives before Griffin Gravitt was able to punch in another touchdown to make the score 28-13 in favor of the Wildcats.

Lafayette would run the following kickoff back for a touchdown to make the score 28-19 in favor of CA, and the visitors quickly got the ball back to score another touchdown just before the halftime break.

The Wildcats went in at halftime clinging to a 28-27 lead.

The third quarter saw both teams trade punts and turnovers and Crisp still held their one-point lead heading into the fourth quarter.

Gaige Little gave the Cats some breathing room with a touchdown on a six-yard run halfway through the fourth quarter. They converted the two-point conversion and were leading 36-27 with just over six minutes to play.

Lafayette was later able to stay alive with a touchdown pass with 3:38 remaining in the game that brought the score to 36-33.

Crisp attempted to run out the clock on the following drive, but Lafayette was able to force a fumble and recover the ball, which gave them one more opportunity with just over a minute left in the contest. The very next play would clinch the game for the Wildcats, however, as Little intercepted the Lafayette pass attempt and returned it for a touchdown that put Crisp up by a score of 42-33.

Lafayette attempted to bring the score closer with almost no time left but they were unsuccessful and the Wildcats were able to run out the clock for the victory in their season opener.

Crisp Academy will continue their season next Friday night on the road as they travel to Crosspointe Christian. 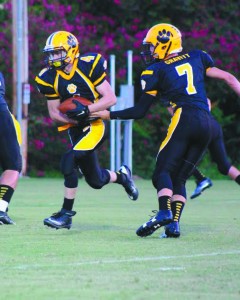 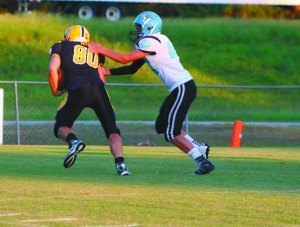 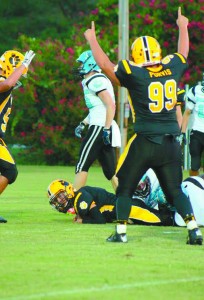