It was a little different, watching high school football on Saturday afternoon but the same result. The Crisp County Cougars traveled down to Ashburn to hand the Turner County Rebels their second loss of the season. Turner who beat the Cougars region opponent Dougherty County 34-32 in the first game of the season and then lost to another region opponent Worth County 39-36 fell to the Cougars 42-20.

In the beginning it looked as though Crisp County might whitewash Turner as the Cougars as they had a 14 -0 halftime lead. The Cougars jumped to a 7-0 lead on quarterback Patrick Felton’s touchdown run and Brandon Thompson PAT was good with 7 minutes to go in the 1st quarter the score was Cougars 7 Rebels 0. Then with 1 minute to go in the half, Myles Napier completed a 24-yard touchdown strike to Markaviest Bryant for a 14-0 lead following a good PAT from Thompson. The Cougars got the ball first in the second half and wasted no time in scoring and with 10 minutes to go in the 3rd quarter the Cats went up 21 -0 on a two yard tote by Patrick Felton and another Thompson PAT. Suddenly a long bomb to Turner County’s Tamorrion Terry, the highly recruited wide receiver and basketball player resulted in the Rebels getting on the board. Their two-point attempt was unsuccessful and the score stood at 21-6. The Cougars jumped right back on them when two minutes later Felton chunked 38 yard pass to TJ Ming for another Cougar score and with Thompson    4th PAT the Cougars were up 28-6. Turner County was not ready to throw in the towel and bombed another pass and converted on two points to bring the score to 28-14.

Then came the only scare of the day. The Rebels got the ball back 2 minutes later and launched another touchdown pass, the PAT was no good and the Rebels were within striking distance. Crisp County got the ball and quickly marched down the field and Felton ran for his 3rd touchdown of the day. Thompson added his 5th PAT and the Cougars were up 35-20. The Cougars got the ball back again and moved down the field before scoring on Deangelo Griffin 2 yard tote and Thompson was a perfect 6 for 6 on PAT’s for the day and the final was 42-20. “Overall I am please with boys level of play, they slipped a bit in underestimating Turner County’s passing ability, by letting #1 Tamrrion Terry get behind them he is very good athlete,” said Head Coach Shelton Felton. “ They did regroup and take it to them head on and now we get a rest.” The Cougars are off till next Thursday September 15th. They will travel to Macon, Ga. to take on Rutland for the first time in school history. 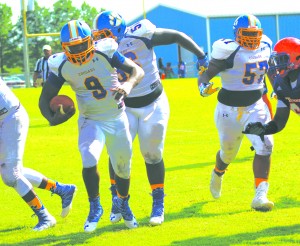 Where are they Now : Johnny Middlebrooks