Wilcox County Lady Patriots Varsity’s Anna Tripp was perfect at the dish, going 3-3. She singled in the third and fourth innings and doubled in the fifth inning. Haley Howell also added two hits for the victors in their 10 hit performance. “The girls were on their game”, said head Coach Stephen McDuffie.

Irwin County couldn’t get anything going as long as Autumn Tripp was pitching. Irwin County managed just one hit off of Tripp, who allowed no earned runs, walked one and struck out six during her four innings of work.

Wilcox County Lady Patriots Varsity went up for good in the third, scoring three runs on a two-run error and a sacrifice fly by Ellis. 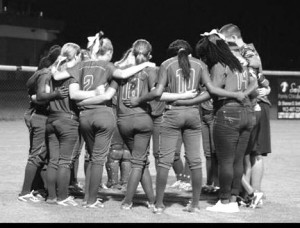 Despite garnering 13 hits and 7 runs against Telfair County the Lady Pat’s still were over taken in the 7th inning. The Griffin sisters Marquetta and Marteisha got 3 hits apiece and Oakleigh Reeves and Autumn Tripp both chipped in 2 each as well but the Pat’s lost 8-7 on Thursday. Wilcox ace Laura Lee Keene went 6 and two thirds innings with 116 pitches, struck out 5 walked 2 and gave up 8 runs on 11 hits was saddled with the loss. The loss gives Wilcox a 10-4 report card to date and puts them in 2nd place in the region behind Telfair.