After a somewhat slow start and some unbelievable back-to-back fumbles, the Crisp Academy offense finally got on track. “It was disturbing to see the boys make those kinds of mistakes that early in the game but I am happy the way they bounced back and gathered their composure, “ said Head Coach Price Jones.

The Big Cats hit pay dirt first on a Blake Odom touchdown run followed by a Griffin Gravitt 2 point conversion and the score was 8-0. After holding Twiggs Academy Trojans and forcing one of many punts the cats struck again on a beautiful bomb from Griffin Gravitt to Garret Holt for 40 yards and a touchdown, afterwards Gravitt added another PAT and the score was 16-0. The cats again held Twiggs got the ball and bombed it to Devin Howard for 30 yards, which set up a William Bodrey 2 yard plunge, the PAT failed and the Cats were up 22-0 at halftime.

The Wildcats defense continued to dominate Twiggs in the second half. The quarterback Gravitt took the ball turned the corner and went 33 yards untouched for another Cats score. Gravitt followed up the run with another two-point conversion and the Cats were sitting atop the Trojans 30-0. At the end of the third quarter Gage Little busted a long 35 yard tote to score again and then also carried in the two point conversion to make the score 38-0. In the 4th quarter with most of the substitutes getting some playing time. Noah Mercer who was in at QB ran another touchdown the final one of the night from 10 yards out and the PAT failed and the final score was 44-0. “ I was very proud we were able to get everyone in the game and we had no injuries,” Jones further lamented. On the night Austin Cobb and William Purvis had a big night for the Wildcats as did Justin Pate on the defensive side of the ball. The Wildcats are now 1-1 on the season and head to Siloam, Ga. to take on an old foe in Nathaniel Greene Academy next Friday.( Look for more photos in Wednesday Dispatch) 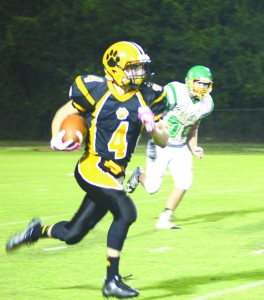 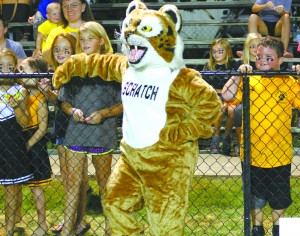