In a game that saw 4 lead changes the Lady Cougars lost a region game to Cook here Tuesday evening by an 11-9 score.

The lady’s jumped out to a 3 to 2 lead in the bottom of the first inning and played some bend but not break ball till the end of the game. In the top of the 3rd Cook County got back on top by one run to make it 4 to 3. The Cougarettes however, charged back for 5 runs and took a commanding lead. After the 4th and 5th inning went scoreless both teams tacked on one run in the 6 th inning and the score stood at 9-5. However, in the top of the 7th inning Cook exploded for 6 unanswered runs to beat Crisp 11-9. “ We let them off the hook, don’t get me wrong they are a very good team we just couldn’t hold them,” said head coach ben Robbins. On the day the Lady’s were led on offense by Alexis Meadows with 2 singles, Ivy Lewis with 2 singles and Riley Blampied had a single, a double and a homerun. The win moves Cook to 13-2 on the year and drops the Cougars to 6-8. Crisp County hosts Worth on September 20th. 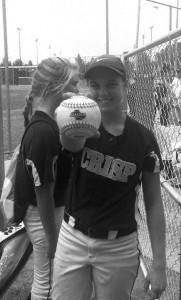