The Fullington Trojans started off on fire Friday night before slowing a bit in the second half but they were still able to hold off a comeback by SGA and win 20-12 to improve to 4-0 on the year on the night of their homecoming festivities.

In the first quarter with 9 minutes to go Lane Mitcham carried in the first of his 3 touchdowns on the from 7 yards out. A 40-yard pass to #1 Jaden Harvey set up the touchdown. The PAT by Brooks Hendrix was good and the score stood at 7-0. Then with 7 seconds to go in the 1st quarter #5 quarterback Will Mashburn hit a wide-open Lane Mitcham on a 59-yard bomb and the score after the PAT was 14-0. Fullington would go on and score one more time on the night in the 2nd quarter when Mashburn and Mitcham would again hook up on a 46-yard pass for a touchdown. This time the PAT failed and Fullington held a 20-0 lead going into halftime.

In the third quarter Mitcham garnered in two interceptions and Fullington clung to their 20-0 lead as they were unable to get into the end zone. The 4th quarter saw a resurgence of the SGA offense as they finally began to click with

# 12 KJ Warren gathering a great deal of real estate. With 9 minutes to go in the game Warren scored from 20 yards out and the PAT was no good but the score was now 20-6. SGA with the help of much better offense and defense that started to make a few plays also got a little help from the flags that Fullington kept collecting. With 1 minute left SGA scored again and missed another PAT and the game would end with Fullington taking a knee to run out the clock. On offense Mashburn was 7 for 13 for 197 yards and 2 td’s. Mitcham caught 5 passes for 172 yards and two touchdowns and rushed 9 times for 64 yards and another touchdown. Also Hunter Hawkins carried 12 times for 41 yards and Nick Arzola had several big plays for the Trojans. On the stop-em side of the ball Hawkins had 10 total tackles and Thomas Kenton had 9.

In the middle of things were lineman Hunter Hughes and Colin “Spanky” Infante who filled gaps and moved defenses around all night.” I am happy with the overall performance,” said Head Coach Jason Hurst. “We put pressure on them early and really kept them from throwing which is what they wanted to do, it was a quality win over a quality opponent. “ The Trojans host Dawson Christian next Friday at 7:30pm. 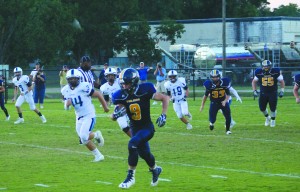