From start to finish the Dooly County Bobcats owned the Schley County Wildcats. Running and passing at will Dooly wasted no time getting on the board after just 44 seconds into the game Dre Lawson caught a 60 yard bomb from his brother Bo Lawson and the score was 6-0. The first PAT of the night by Juan Gonzalez was no good but he would go on to make 7 in a row as the final score would end up being 55-14 Dooly County. Next up was an Andre Interception and the Bobcats moved the ball down the field where John Clayton dove in from 2 yards out and the score was 13-0.

Quarterback Bo Lawson started suffering from cramps but he would return to lead the Bobcats. In the second quarter there was a bizarre interception by Reggie Smith, who caught the ball and immediately threw it forward about 5 yards to Clayton who caught it and ran about three yards and fumbled it back to Schley County and it was their ball 1st down. The Bobcats would suffer two touchdowns being called back one a bomb to Stevie Rhodes from Lawson and a Lawson scramble of 40 yards was also negated. Then Lawson hit Josten McGee on a thirty-yard toss for another score and the Bobcats were sitting atop a 20-0 lead. The Wildcats had a little flare in them with a half back throwback to Quarterback pass for along 50-yard Touchdown strike, which brought the score to 20-7. Dooly once again got the ball drove down the field and this time Lawson hit Desi Lester on a 5 yard pass to make the score 27-7. Still in the second quarter the Lawson brothers again connected on an 18-yard pass to push the score to 34-7. Then with just seconds left before halftime Lawson chunked his 5th touchdown of the first half and to McGee this time and the Bobcats were on cruise control with a 41-7 halftime lead.

The second half was not much better for Schley as Dooly for the most part kept pounding the ball in the end zone. Dooly scored two more touchdowns one 63-yard pass from you guessed it Lawson to Lawson and 6 yard run by Qua Lowe. The Lowe run was set up by a very fine run from Jay Pittman of 40 yards. Schley scored one more time on a long break away run and the final was 55-14.

” I was extremely proud of the boys and our offense was clicking pretty good, I can see we still have some mistakes to work out but playing those bigger teams early in the year has helped us get better,” said Head Coach Jimmy Hughes. “The defense obviously was getting after it but we are going to get some folks healed up in the next week and get ready for Hawkinsville,” Hughes lamented further. 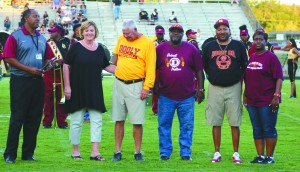