Patriots Fall to Trojans on Homecoming

The Wilcox County Patriots were unable to cap off their homecoming festivities with a victory as they fell to the Telfair County Trojans on Friday night. Telfair County got on the scoreboard first with a long drive that saw them punch in a touchdown run from two yards out. The extra point was successful and the Trojans took a 7-0 lead just over four minutes into the game. The Patriots were forced to punt on their next drive and Telfair County was able to make it pay off with their second touchdown of the game as they extended their lead to 14-0. The Patriots were again forced to punt on their subsequent drive, but a great kick and solid coverage helped them pin Telfair at their own 1 yard line. The Patriots forced Telfair to fumble just two plays later and they were able to recover to set up their offense with great field position. On the very next play, Desmond Tisdol ran in a touchdown from 7 yards out to get Wilcox County on the board. The touchdown made the score 14-7 in favor of Telfair heading into the second quarter. It was all Telfair in the second quarter, however as they tacked on three more touchdowns to extend their lead to 34-7 going in at halftime. Telfair County intercepted a pass that set up another touchdown just over 2 minutes into the second half. The score put them up 41-7, but Wilcox was able to respond with a score of their own. The Patriots offense was able to string together an impressive 73 yard touchdown drive that was capped off with a 40 yard touchdown pass to Jordan Benjamin, who beat two defenders and found himself wide open streaking up the sideline. The score cut the Telfair lead to 41-14 in the middle of the third quarter but the Patriots were unable to get any closer than that. Telfair tacked on one more touchdown late in the third quarter to make the final score 48-14. Wilcox County will be off next weekend, and will be back in action in two weeks when they travel to Charlton County hoping to pick up their first region win. 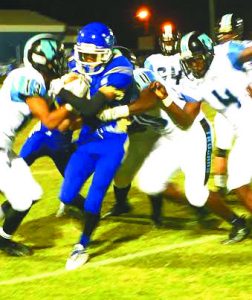