This Issue is not going away

It really cooks my corn for some one to sit during the national anthem. It tells me you do not value my two boys, my nephew and several other Cordelians that I know and also a dozen family members and millions of other Americans who serve or have served our nation on the front line against our enemies. You can go sugar coat this with all the “it’s my right” and I am proving a point trash you want to but in my humble opinion it is nothing but GARBAGE.!!! Stand up for the anthem because it represents those rights you so vehemently proclaim!

When Colin Kaepernick decided to see if he could boost his career and stay in the NFL a little longer with his kneeling stunt all he really did is cause a stir. I wouldn’t care if now if he was he promoting the second coming of Christ. You can kneel before God when he gets here but up till then you stand for the anthem. All you did Mr. Kaepernick is to tick off 200 million Americans. The NFL is suffering for this junk. Now recently a friend of mine Robby Stripling made me aware of a young man named Kevin McCain. You see Kevin who is 11 years old suffers from muscular dystrophy and he struggles just to stand much less walk. Then the other evening as Kevin was visiting Robby and Ms. Susan’s house as he often does. Robby heard a disturbance behind him and he looked back and

what did he see? Kevin had fought his way to his feet because the National anthem was being played and he had his hand over his heart. Sounds like a lot of older people in this country could take a lesson from a small 11-year-old boy. Kevin has not been plagued with years of advanced education, Kevin doesn’t really know a whole lot about democrats and republicans, about liberals and conservatives, about Muslims and Christians and he don’t know much about history or biology. What Kevin knows is that he is an American and that you have to stand and put your hand over your heart when the anthem or pledge of allegiance is recited. There is a very old cliché that goes “out of the mouth of babes flows the truth.” In this case it is not words but actions instead and “if the shoe fits wear it.” Thank you Kevin for showing the grown ups what they should already know. Hey, Colin wake up you ain’t going to win this show, everyone knows you have the right, we just don’t agree with you at all!!! 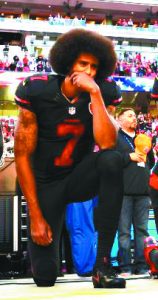 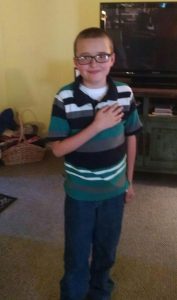