The Crisp Academy Wildcats travelled up to Macon, GA last Friday night to face off against the Central Fellowship Christian Academy’s Lancers.  The Wildcats won the coin toss and elected to defer to the Lancers. The Lancers received the ball and were quickly stopped by the Wildcats.  The Wildcats continued to be aggressive and pushed the Lancers into their end zone, where the quarterback was sacked. The tackle necessitated a safety and gave the Wildcats the first points of the game. The Wildcats then received the ball and made a quick drive to the end zone. After the successful two-point conversion, the score was now 10 – 0 in the favor of the Wildcats, after less than a minute of game time.

The Lancers attempted to make a few plays but the Wildcat’s defensive line stopped them in their tracks.  The Wildcats received the ball and another quick drive put them into the end zone and up another 8 points after a successful PAT. The strong defense and rapid offense, boosted by quarterback Griffin Gravitt’s accurate passes, allowed the Wildcats to jump far ahead of the Lancers and bring the score up to 40 – 0 at the end of the first half.

Once the third quarter began, Crisp Academy made yet another rapid drive into the end zone, bringing the score up to 48 – 0.  A continuous clock ran since the beginning of the third quarter, and the Wildcats inserted their subs and for the rest of the game, giving younger players essential experience in the game. When the buzzer rang, the Wildcats had made their presence known with a crushing victory against the Lancers. When asked to comment on the game, Coach Price Jones gave a positive response.  “I believe the game went well.  We had the first safety of the season, which is always nice.  Once we received the ball, we ran the ball and scored quickly.  Our defense continued to stop Central Fellowship in their tracks which allowed us to make more offensive drives.  Every time we received the ball, we made a successful drive.  Our players played well.  We had the opportunity to play all of our players and we took it.  That’s always positive.  This was a good win coming off our break.”

“There are still a few things we need to work on,” Jones added. “We need to cut back on our penalties.  We also need to work on our blocking consistency and the length of our blocks.  We hope to improve on this and to demonstrate that next week.”

Key players on the offense were QB Griffin Gravitt, with 187 passing yards, including four touchdown passes. Gaige Little accounted for a total of 20 points, while Bobby Ray Mitchell ran in 8 points.  Griffin Gravitt, Garrett Holt, and Devin Howard each ran 6 points. On Defense Billy Hardin, William Bodrey and Austin Cobb were pointed out as leading the effort on Friday. 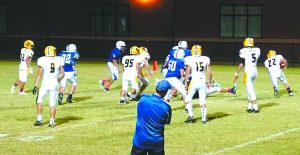 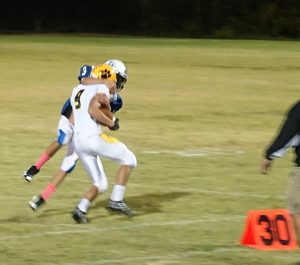 Lady Patriots drop a close one