The Crisp Academy Wildcats travelled to Baxley, GA Friday evening to square off against the Appling Christian Academy Lancers. With the Wildcats’ recent wins on the road, they were poised for the region playoffs with only one more game to secure their position.  The Lancers won the coin toss and elected to receive the ball.  The Wildcats kicked the ball off to the Lancers, who quickly ran the ball down the field.  They were aggressive with the plays and quickly made the first touchdown of the night. They had a successful PAT and brought the score to 8 – 0, Lancers.  After receiving the ball from the Lancers, the Wildcats were stopped after a few plays and punted the ball.  The Lancers then muffed the ball, and the Wildcats were able to recover possession.  The Wildcats quickly got their bearings and made quick and successful drives in the red zone, and were able to make their first touchdown of the night. They made a successful PAT and tied the score at 8 – 8. This would end the first quarter.

As the second quarter began, the Wildcats defense stopped the Lancers in their tracks and took possession soon after.  The Wildcat offense then began to assert their dominance on the field with a quick and aggressive drive down the field and scored once again.  This would set the tone of the evening, as the Wildcats defense stopped any forward progress for the Lancers and the Wildcats offense scored multiple touchdowns during the second quarter, bringing the score at halftime to 36 – 8, Wildcats.

In the third quarter, the Wildcats once again gained the upper hand and managed to score 14 more points.  The Lancers were not giving up quite yet though, and managed to break past the Wildcat defense and into the end zone, giving them 6 more points.  The PAT was no good.  This would bring the score to 50 – 16, Wildcats.  In the fourth quarter, the game slowed down, but both the Wildcats and the Lancers scored a touchdown each, bringing the final score to 58 – 22, Wildcats.

When asked to comment on the game, Coach Price Jones had yet another positive outlook on the team. “We rose to another level in this game. Both our offense and our defense increased their intensity. By the first half of the game, we had control over the game. Even though I didn’t want to give up those points towards the end of the game, I am glad all of our players got to play. That’s always positive,” He stated.

“Our team is doing really well this season. If we stay focused and injury free, I feel we have a chance to accomplish some really great things,” he added.

The Wildcats have achieved region standing from this game although their seed is currently unknown.  They will be playing John Hancock Academy at home next Friday. 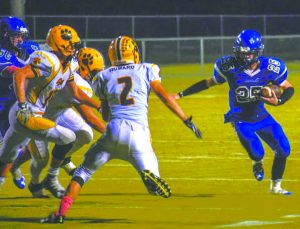 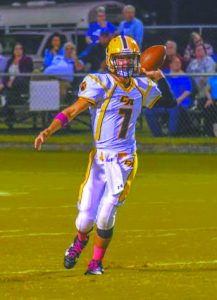 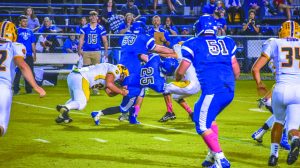