The Dooly Bobcats feasted on roasted Eagle Friday night, Crawford roasted Eagle that is. The Bobcats again for the second week in a row started off slow allowing the visitors to score early and take a 6-0 lead. Then the Bobcat defense stiffened up and the Eagles soared no more as the Cats won 40-6.

In the 1st quarter quarterback Bo Lawson hit Desi Lester Jr. on 18 yard throw for a touchdown the PAT by Juan Gonzalez was good and the Bobcats too k the lead and never let go.

Later in the 1st quarter Lawson would again find Lester on a 5 yard strike and with a good PAT the Cats moved to 14-6.

In the 2nd period Lawson found his brother Dre Lawson on an 82-yard bomb, the PAT failed and the score was 20-6. The first half scoring wasn’t over yet as Lawson busted loose on a 95-yard touchdown run and with the good PAT the score was 27-6 at half time.

“We started a little sloppy but we corrected our actions and the boys played hard nose football that paid off in the end,” said head Coach Jimmy Hughes. The Bobcats wasted little time in the third quarter adding to their lead. Lawson would carry in two more touchdowns from 6 yards and 15 yards with one good PAT. The Cats were able to get in a lot of kids in the 4th quarter to play and the score ended 40-6. “The offensive line did a good job of maintaining order.” On defense Malik Burns, Joe Hightower and Reggie Smith lead the way for the Bobcats. “ We are facing a quality opponent this coming weekend on the road so we are going to get busy preparing for that,” Hughes added. The Bobcats travel to Butler, GA.  To take on the 6-1 Taylor County Vikings at 7:30. 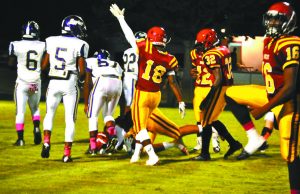 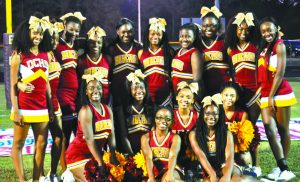 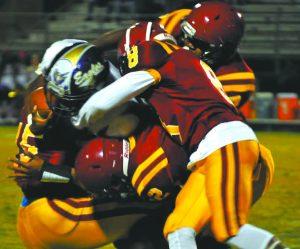 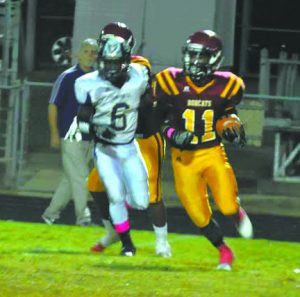 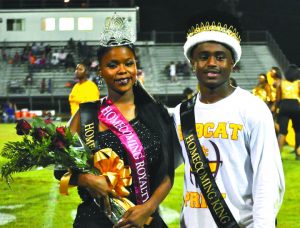