The Crisp Middle School won the Deep South Football Conference title for the first time in 15 years on Wednesday by a score of 26-6 over the Purple Hurricanes of Fitzgerald.

The Cougars received the football first and drove down the field 65 yards. Marquez Palmer scored on a 9-yard toss from PJ Coleman. The extra point failed. The score was 6-0 at the half. After kicking off to the Purple Hurricanes, the Cougar Defense remained stout, as it has all year long, forcing the Hurricanes to punt. Marquez Palmer received the punt and returned it for a 70-yard touchdown. PAT failed again. This made the score 12-0. At the end of the 3rd quarter DJ Lewis caught a 55 yard bomb from AJ Lofton to make the score 18-0 the PAT was good by PJ Coleman. Midway of the 4th quarter Raheem Ashley scampered to pay dirt on a 25-yard run to Ice the game. The Purple Hurricanes completed a 2-yard pass to score their lone TD with 1:50 left in the 4th. “Our Team has been on a mission since July 11th (Summer Workouts). We accomplished everything we sought out to do. We were undefeated along with capturing the Deep South Title. I told the kids, before the game, that everyone keeps asking, “How long has it been since the CCMS Football team won the Championship?” It was back in 2001, but when you all go back to school on Thursday, you will be able to tell everyone, the answer to that question is YESTERDAY!!”, Said Head Coach Chris Paul. 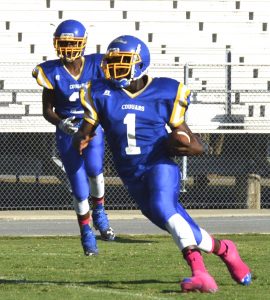 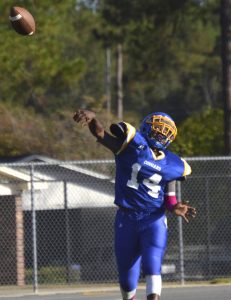