Lady Patriots back in Columbus

The Lady Patriots scored five runs in the third on an RBI single by Megan Fuller, a two-run double by Laura Lee Keene, and a two-run single by Michelle Fuller.

Fuller racked up three RBIs on three hits for the Lady Patriots.

Keene was in control in the circle. Marion County managed just two hits off of Keene, who allowed no earned runs, walked none and struck out five during her three innings of work.

The Lady Patriots tacked on another four runs in the fifth. Montana Ellis kicked things off with a single, plating Marteisha Griffin. That was followed up by Haley Howell’s double, bringing home Ellis and Griffin. The Patriots 12 hit performance was led by Megan Fuller and Laura Lee Keene and Montana Ellis and Haley Howell both added two apiece for the winners. “The girls were solid in all aspects of the game said, Head Coach Stephen Mcduffie.

It was Marquetta Griffin’s hot bat that had two extra base hits as Wilcox County Lady Patriots took home a 5-0 victory over Marion County in seven innings on Wednesday.

Laura Lee Keene was sharp on the rubber. Marion County managed just one hit off of Keene, who allowed no earned runs, walked none and struck out six during her 3 1/3 innings of work and got the win.

The Lady Patriots stayed on top until the final out after taking the lead in the third, scoring one run on an RBI double by Griffin.

Wilcox County Lady Patriots Varsity tacked on another three runs in the fifth. The inning looked promising, as Griffin doubled, bringing home Jamerical Marshall to kick things off. That was followed up by a Montana Ellis single, plating Griffin. Marquetta Griffin gathered two doubles for the Patriots in the winning effort. “Another solid team effort by the girls as we prepare for the elite 8 lineup in Columbus,” said Coach Mcduffie. The ladies will be back in action Thursday October 27th against number 1 ranked Gordon Lee in Columbus. 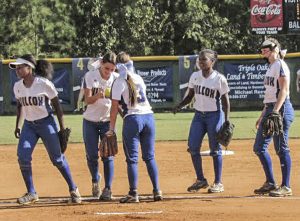